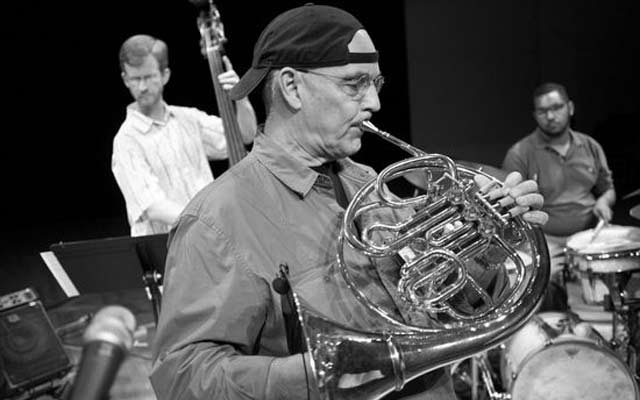 John Clark’s music for various permutations and combinations of ensembles is rooted in his unique singing style, which encompasses a wide and expressively varied range of horn and – sometimes not so non-verbal sounds. Beneath the seeming ‘minimalist’ simplicity of his forms lies a wealth of detail, nuance and gesture. This disc The Odd Couple Quintet + 1 features music characterised by quick, rapid flurries on the French horn and on Michael Rabinowitz’s bassoon, ostinatos that play against the notes on the bass, the piano and often Pete Levin’s keyboards. All of the music including the mysteriously alphanumerically titles pieces are harmonically dynamic, enhanced by telling shifts in register and texture. 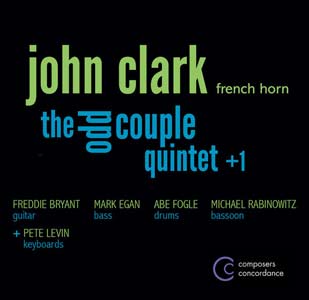 The Odd Couple Quintet + 1 comes not so long after Song of Light (Composers Concordance, 2012) and although not thematically linked, this 2015 recording, like its predecessor, is proving to be quite the definitive French horn record; nicely embellished by the bassoon of Michael Rabinowitz. I cannot help but suspect the two musicians are also thumbing their noses ever so gently at convention as well. Consider the music (the glacial playfulness of “The Odd Couple Theme” and other titles calculated to befuddle) and you will know what I mean. Also like its predecessor, which explores the tone colours and timbre of his instrument this disc does not disappoint.

With the contrast in the outlook and the playfulness, albeit an adult kind, between the recognisable and the not-so-recognisable music are works radically different in character yet youthful in the buoyancy of melody and harmony that the musicians bring out in each of the pieces. If you could take away, for a moment, the bookends: “The Odd Couple Theme” and “Corporations Are Not People you are left with the marvellously mysterious pieces, which might also be treated as of a suite of music – two suites to be precise.

The phrasing, particularly in the slower movements is sinuous and sustained, but the articulation remains adequately Spartan to allow the music to shine through as the art that it is, rather than to allow the purely cerebral achievements of a prodigy testing out his new-found skills. This drives John Clark’s enthralling musical ideas with the kind of conviction that makes it difficult to turn off this disc without listening to it from beginning to end. Such is the magnetism of the music by Mr. Clark.

This music is recorded with their customary clarity, too, which adds an extra dimension to the performance of the musicians, particularly in the first piece and in more muscular passages in the “MK…” series, where John Clark uses subjects in repeatedly different and increasingly outlandish scenarios, as well as in the spontaneity of the various contrasting sections of “Corporations Are Not People”. Everything that this Quintet + 1 have to throw at these pieces shows them to their best advantage – fleet-footed blowing, tongue-in-groove intonation and ensemble, and a sense of momentum that always drives the music in the right direction.

John Clark was born in Brooklyn and grew up in Rochester, New York. In 1966 he received a B.A. from the University of Rochester, where he also studied horn with Verne Reynolds at the Eastman School of Music. From 1967 until 1971 he played in the United States Coast Guard Band. Clark received a M.M. degree (with honors) from the New England Conservatory of Music in 1973. He studied composition and improvisation with Jaki Byard, Ran Blake, and George Russell; and horn with James Stagliano, Thomas Newell, and Paul Ingraham. In 1991 he received a patent for the “hornette,” an instrument with the same range as a French horn but with a forward-facing bell for greater projection. He taught at the State University of New York at Purchase from 2001 until 2008. He is now on faculty at Manhattan School of Music. Read more…