The dark, sardonic beauty of this repertoire on Calls for Action by its composer (and bassist) Harish Raghavan is utterly beckoning right from the opening bars of his solo “Intro” and unto the dénouement of “AS”. Before it gets to the end, though, there is explosive atomic activity in the music which drives the frenetic pace at which Mr Raghavan will have his musicians play. Time signatures are challenging tempos are often pushed to the brink, abruptly pulled back in order to provide a modicum of equanimity – usually on the gently rippling melodic segues played my Micah Thomas on the piano or Joel Ross on the vibraphone, which gives Immanuel Wilkins some space to breathe his way through melody and harmonic changes… 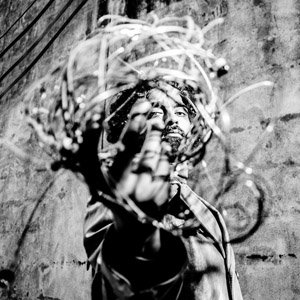 Until, that is, Kweku Sumbry explodes on snare and tom-toms, slicing the air around his drums in broad arcs aimed at the brass of the cymbals which, in turn, sizzle to a crisp. Mr Raghavan, of course, is the one whose lurking thunder controls everything. His is a command performance on an instrument that is diabolically difficult to master. But this is exactly what we can discern – a mastery that is both rare and exquisitely inviting. It is also a joy to listen to not the least because he inhabits the bottom register often, which is where – you would think – a contrabassist’s attention ought to be; at least for the most part. The rumbling is majestic. Mr Raghavan is a master of intonation and expression even when he plays at high speeds – as on the climatic middle-to-end of the superbly melodious “Sangeet”, which seems to frolic during this sequence like a Sufi gone mad in communion with The Divine One.

All is not murderous doom and gloom, however; sometimes the music is aching – as in the interminable sadness of “Caged”, which breathes heavily onwards. It is a superbly crafted depiction of perceived imprisonment melodically set in a pneumatic vat of indigo-blue. “The Meters” unfolds in the quietude of the disc’s centre, but the descent into more churning activity is not far off. Good cheer, albeit set in the happy rhythm of madness is to be found on “Lunatico” (how apt). “Calls for Action” is a tumultuous vortex of melodic and harmonic activity and yet it coalesces around the breathtaking rhythmic pulsations that bind together the colours and textures.

The radiance of the vibraphone and the lithe textures of (the dazzling runs of Mr Thomas’ right hand at) the piano often provide a reflective shimmer of light to illumine the ink-dark canvas of the music – to illustrate you might listen to “Seaminer”. Mr Raghavan has chosen his cohort wisely. Joel Ross, Mr Sumbry, Mr Thomas and Mr Wilkins are all completely attuned to the leader’s vision and artistry and play with intuitive and idiomatic grace. Joe Blaney has captured all the frenetic activity by engineering the sound with great detail and in uncommon warmth. A disc to die for…