For as long as I can remember Hungary has been a magical source of contemporary improvised music. This music was fermented in the proverbial underground during the Soviet era and sadly, many of the musicians – brilliant to a man (and woman) – did not succeed in bringing their music out of Hungary into the rest of Europe and certainly not across the pond, to the Americas. At least, the celebrated world of Hungarian music remained a well-kept secret after Ferenc Liszt, and then Bela Bartok and Zoltan Kodaly. The music – traditional folk music made it as far as Bartok, but then later remained largely suppressed during the Stalinist era from the Second World War until the fall of the Berlin Wall, that is. But thankfully, not any more. Hungary’s Budapest Music Center (BMC) has been assiduously developing its artistic roster and their respective repertoire through beautifully produced records, remarkably also, with the support of the National Cultural Fund of Hungary. 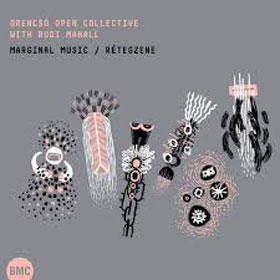 And if BMC has been nothing but assiduous in its coverage and preservation of the repertoire, musical masters such as the gray eminence István Grencsó have been assiduous in responding to the muse and creating the music via various formations and combinations of ensembles. This 2015 recording of István Grencsó, Marginal Music is just such a profoundly beautiful recital. The title may suggest that this music is a sidebar of sorts. However, it is anything but that and demands to be heard in the present context. The works are much more than marginal; more like mystical and quite magical, actually. They’re skillfully conceived and executed; attractive and showing a remarkable degree of contemporaneity, indicated by superb blowing of the reeds and woodwinds, by way of ornamentation and even fingering and dynamics. Every one of the pieces from the very short movements to the longer ones, sound brilliant and inspiriting. Brilliant in terms of instincts, modern virtuosity, whether it’s a question of attack, articulation and dynamic variation.

István Grencsó sets things going with his rhapsodic evocation of things lived and dreamt, then Rudi Mahall contributes his ingenuity which suavely expressive central ‘arabesques’ are framed by the two bassists that progressively accrue and disperse rhythmic energy in like manner. Pianist Máté Pozsár, the bassists Robert Benkő and Ernő Hock together with the timeless energy of drummer Szilveszter Miklós conjure up the magnetic force of the rhythm section giving the music remarkably chamber-like dimensions. These musicians score considerable success with these exquisitely improvised sequences that are interpolated with the idioms of blues and jazz. The vivid, immediate sound is accompanied by a poem in Hungarian (English translation also provided) that one must read in order that the mystique of the music must be deciphered. Personally I would have preferred more detailed booklet notes especially bios of the musicians who need fresh introductions to aficionados in the Western world and believe me there would be a lot to know and learn about these outstanding musicians.