It is a mysterious travesty, this fact that the tenor saxophonist Don Braden does not get more prime time radio and TV play. Mr. Braden is possessed of a big fat tone that recalls to mind Gene ‘Jug’ Ammons as well as Dexter Gordon, or rather a cross between the two: Jug’s voluptuous notes and Mr. Gordon’s commanding authority as he seems to punch in the keys on his way to a sensuous relationship with his instrument. This keeps Mr. Braden at the top of his game throughout Luminosity an absolutely gorgeous organ-driven record. Let’s just say that Don Braden – whether he is playing saxophone or flute – and the rest of Organix play with beautifully choreographed physicality that’s punch-drunk on its own vitality. 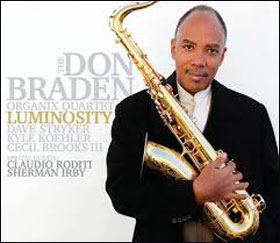 This is also one of the finest organ recordings. No other organ quartet in recent memory gets off on music quite like this one does. Following the strepitous impact of the opening – fundamentals slipping away like a climber’s fingers threatening to plunge him into the ravine below – the quartet won’t shy away from what comes next: gestures that hollow out polite organ-quartet-music niceties from the inside. To put it more bluntly, this organ quartet plays with visceral excitement, roughhousing with notes, phrases and lines; harmonies and rhythms. This always has the listener on edge never seeming to prepare one for what is to come next. A note trembles then cracks with all the finesse of an elastic band snapping; a low-end retort sounds like a precocious one-year-old who is bashing building blocks together. And then silence between track five and six, which is broken by Don Braden’s audacious version of Chelsea Bridge, a soaring, profoundly beautiful version that sends nots straight up to heaven into Billy Strayhorn’s ear.

I can think of a million other reasons why this is essential listening for anyone considering a career in the music of the saxophone but I’ll stick with the term ‘path breaking’ for now where frenzy and stasis are forced to coexist. This is because Don Braden has an instinct for sonic architecture in order to make sense of the complexities of the music. His teasing games with textures that relentlessly transform, twist inside out, dovetail seamlessly into polar opposite states of being. Add to that the fact that the music reaches dizzying heights at the time of its dénouement – always – with rapidly played high-register glissandos. It would seem ridiculous – after all of this – to consider any one song to be singled out for special praise. Luminosity congeals into a sensational mould around the entire repertoire recorded on it.

Another travesty would be too send all the accolades Don Braden’s way. True this is his quartet; his record but let’s not forget that the whole is only as strong as the sum of its parts. How else would you sum up the performances of spectacular performances by Hammond specialist Kyle Koelher, guitar-meister Dave Stryker and the master of rhythm colouring Cecil Brooks III as well as brilliant cameos by Sherman Irby on Driftin’ and the great Claudio Roditi on Chelsea Bridge. The all-encompassing scope and ambition of this disc is winsome. Totally winsome.

Track List: Luminosity; Jive Turkey; Bud Powell; Do Love Me Do; The Time We Shared; I Could Write A Book; Chelsea Bridge; Walkin’ The Walk; A Whole New World; Driftin’.

Don Braden is a Jazz musician of the highest caliber. For over 30 years he has toured the world leading his own ensembles on saxophone and flute, as a special guest, and as a sideman with Jazz greats Betty Carter, Wynton Marsalis, Freddie Hubbard, Tony Williams, Roy Haynes, and many others. He has composed music for ensembles ranging from duo to full symphonic orchestra, in many styles, for recordings (including 19 CDs as a leader and over 80 as a sideman), film, and the television networks Nickelodeon and CBS. Read more…