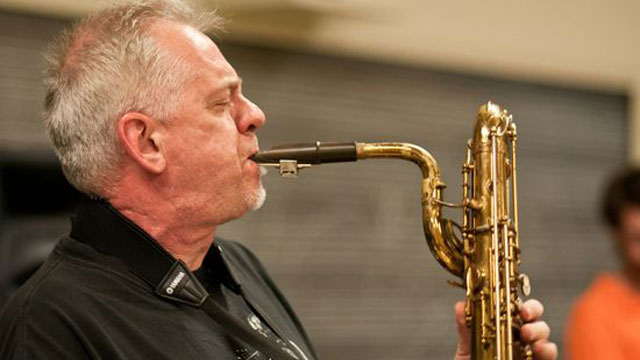 Glenn Wilson the baritone saxophonist exudes good taste from every musical pore in his body and soul. His romance with the big horn is almost palpably physical and the manner in which he seems to caress each note he plays suggests a sensuality that is rare among users of the baritone for this is a horn that is better suited to gruffness and a gravelly voice. This, in turn gives rise to a sensation that is almost too rough to be as caressing. In this regard he recalls Duke Ellington’s great baritone player Harry Carney. Mr. Wilson’s embouchure is such that his lines are viscous and he spews them forth in great tongues of fire. But first there are notes that pop out of his horn like plump drops of magic potion that then fly up, pirouetting as they do so in balletic swirls forming those hot and gushing lines that he has become known for. Sometimes Mr. Wilson holds those notes as if they exist in suspended animation and then when their is too much to bear he lets go and the notes dissipate in feathery poofs while others take their place. On Timely this is absolutely breathtaking to listen to especially as the baritone saxophonist plays opposite the brazen sound of the trumpet—and sometimes the softer, flugelhorn—both played with ravishing beauty by John D’earth. 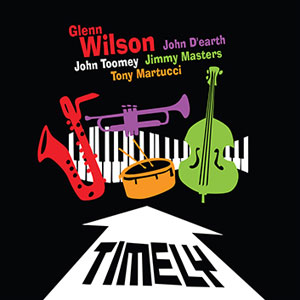 The dramatis personae might have seemed thin on the ground for any other ensemble, but the command performances by the two characters more than compensates for the fact that there are just two characters in this performance. Moreover baritone saxophone and trumpet make for strange bedfellows sometimes. Here, however the relationship is so close that they dance around each other like atoms in a double helix molecule. This contiguity is often broken by the piano of John Toomey. The pianist does so with a gush of notes that he seems to stir out of the keyboard in a veritable vortex. Then when you assume that all is lost, Mr. Wilson swoops back in with a sinuous glissando. Mr. Toomey is up to this as well and he might respond with vaunted arpeggios of his own. But all of this takes place with immaculate taste on the part of the musicians and this is what makes their performances so memorable. Of course none of this would have been possible if these free reining musicians were not expertly corralled by the authority of the bassist Jimmy Masters and the drummer Tony Martucci. This splendid action is on display in Bob Dorough’s jabbering and ever-wonderful chart “Nothing like you has even been seen before”. The best moments of the recording come when the musicians raise the ante on Pepper Adams’ written-for-baritone “Diabolique II,” a song of magnificent colour and texture.

And speaking of recording, this is a magnificently engineered recording, where the sound of each instrument is crisp, exquisitely balanced. The men behind the various consoles it took to bring us this record have seen to it that the timbres and textures of each instrument has been captured in all their glory, including the bass that growls in a beautiful, woody manner. Outstanding performances marvellously captured. What more could you ask for?

Track List: Timely; To Wisdom the Prize; Inner Life; Dylan’s Delight; Fat Beat; Sightseeing; Nothing like you has ever been seen before; Diabolique II.

Glenn Wilson has been a professional jazz baritone saxophonist for over 35 years. The All Music Guide called him “an unsung hero in modern jazz”. After completing his undergraduate degree at Youngstown State University in 1977, Glenn moved to New York City, where he toured and/or recorded with The Buddy Rich Band, Lionel Hampton Orchestra, Toshiko Akiyoshi Jazz Orchestra, Tito Puente, Machito, Bill Kirchner Nonet, Bob Belden Ensemble, Mel Lewis and scores of other jazz and Latin-jazz groups. Read more…