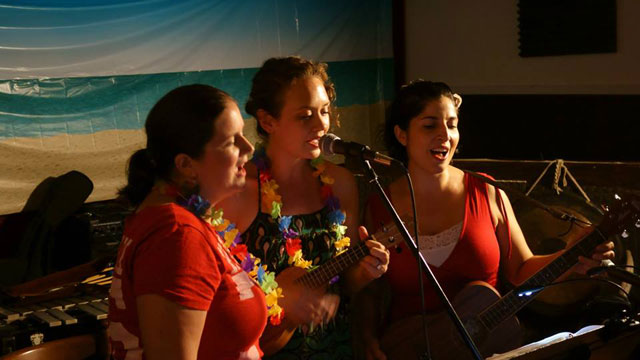 The three-part harmonies of the Boswell Sisters is the stuff that legends are made of and the infectious harmonies of Duchess which aims to bring back the wonder of that group and what it stood for are exquisite as that of the Boswell’s. Each of these extraordinarily talented women—Amy Cervini, Melissa Stylianou and Hilary Gardner—have each been a constant on the vocal scene of New York for some time now. Together for the first time on record, the ladies of song lend a keen and characterful edge to the popular music of the early 20th century. Their humorous or melancholy beauty in Duchess and the often hauntingly sensuousness majesty of some of the songs on this album makes for the stuff that legends are, indeed, made of. The programme here has been thoughtfully chosen here to provide just such contrasts (mentioned above) between the array of songs on this album which could cosset themselves in in these luxuriantly purple harmonies. 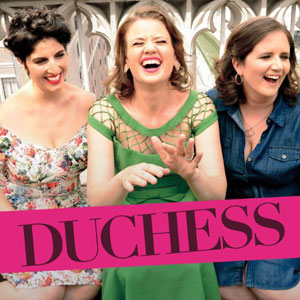 The range of voices—even within the soprano and mezzo ranges—and the different vocal timbres have likewise been shrewdly deployed. In the ear-catching and colorful characteristics for various distinguishing features of dozen or so songs of Duchess are a blend of vivacious élan and lyrical allure together with that swinging Boswellian realism that colors, for instance, “A Little Jive Is Good For You”. To the mezzo of Melissa Stylianou in “Hummin’ To Myself” fall the two other voices in a setting, which Ms. Stylianou converts into something truly beautiful as she interprets tellingly with a mix of mesmerising restraint and fierce projection the mystique of that song. Amy Cervini and Hilary Gardner have their wonderful say in “A Doodlin’ Song” and “My Brooklyn Love Song” respectively. Each finds the nub of the diverse sentiments that the set conveys. The rhythmic teases of “Heebie Jeebies” are cunningly negotiated by the sopranos and the mezzo. The soprano Amy Cervini brings piquant tone, sparkle and spirit to “A Doodlin’ Song”. And Hillary Gardner is the delightful protagonist on both “I’ll Be Seeing You” and the sultry, saucy “Blah, Blah, Blah”.

This debut only serves to give notice that a fabulous new vocal group is here to stay. Be on the lookout for more—much more—from these accomplished vocalists with their new and polished three-part harmonies. The entire album, especially “I’ll Be Seeing You,” portends extremely well for the future of this vocal ensemble. And let’s not also forget the musicians–pianist Michael Cabe, bassist Paul Sikivie and drummer Matt Wilson, as well as guitarist Jessie Lewis and saxophonist Jeff Lederer who play behind these singers. They listen with really big ears and thus are able to bring so much more color to the exquisite nature of this album.

Track List: I Love Being Here With You; There Ain’t No Sweet Man That’s Worth The Salt Of My Tears; Que Sera, Sera; My Brooklyn Love Song; A Doodlin’ Song; A Little Jive Is Good For You; P.S. A Love You; Hummin’ To Myself; It’s A Man; I’ll Be Seeing You; Lollipop; Blah, Blah, Blah, Heebie Jeebies.

A vocal trio in the great tradition of the Boswell Sisters, DUCHESS has quickly gained a reputation for providing tight harmonies and big fun at their shows. Vocalists Amy Cervini, Hilary Gardner and Melissa Stylianou join forces and voices to become, DUCHESS. The gals of DUCHESS love a good party, whether we’re holding court at one of our own shows or making a guest appearance with our musician friends. Lately, we’ve had lots of fun making cameos here in New York City with some terrific artists…what a way to close out 2014! In recent weeks, we’ve had the honor of sitting in a couple of times with the legendary Vince Giordano and the Nighthawks, erstwhile of HBO’s hit series, “Boardwalk Empire.” We had an absolute ball hearing what Vince and the band brought to our charts. Their sound is unmistakably authentic and swinging, and it was especially exciting to perform the “Heebie Jeebies” for Kyla Titus, who is the granddaughter of none other than Vet Boswell! Kyla graciously gifted us with a signed copy of her new book, “The Boswell Legacy.” Another highlight was Wycliffe Gordon stopping by to tear the roof off the joint with his rendition of “Lazy River.” What a thrill! Read more…