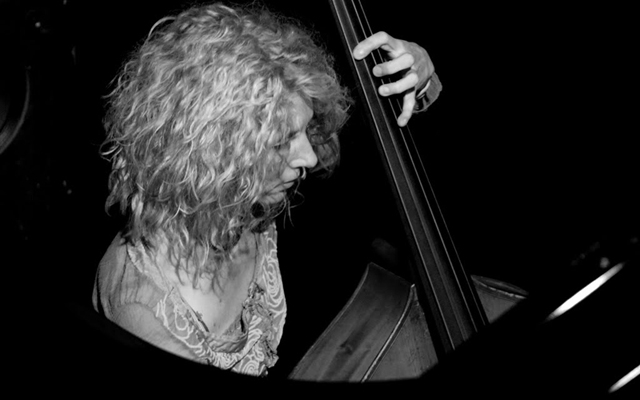 Ever since the brazen adventures of Airbass released in 2009 by the extraordinary bassist Gina Schwarz, she has strengthened her reputation as a musician and bassist of great repute. Since that release, for instance, Schwarz has set no limits to her explorations. Along the way, in a deftly balanced presentation of strikingly contrasting essays through Jazzista and now Woodclock Gina Schwarz offers beautifully turned, reflective and buoyant readings of sui generis works. Woodclock, with its exquisite with its cracked, angular rhythms is simply a pearl. Through it all Schwarz creates a portal into her world – no different from some of the finest bassist of all time, bassists who refused to be content with merely anchoring the rhythmic section of her bands. 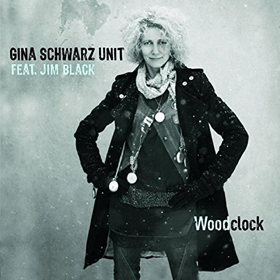 Gina Schwarz is a bassist with a deep knowledge of the bass. She is blessed with a natural ability for intertwining lines of colour and texture in a highly original manner. Her instrumental wizardry extends to an inventive use of supra-polyphonic interpolations akin to a musician playing the infinitely more versatile violin, transposing much of that instruments versatility to the larger, infinitely more cumbersome double bass. Great instrument aside, this is largely down to the judicious alchemy of Schwarz’s perception of how musical architecture and colour can collide to mesmerising effect. The music of this disc is a case in point and it is not merely evident in the profound beauty of ‘Woodblock’ after which the entire album is named, because of the bold performance of each on the songs in this repertoire. Beauty that is no accident.

That such understanding of a complex instrument and such maturity of musicianship is emblematic this early on in the career of Gina Schwarz is both surprising and welcome. It is no surprise, however, to hear how well integrated this work sounds. The bassist’s approach is well-formed and advanced, yet her style is fluid and deceptive, her growling, euphonious tone artfully leavening her logical but nonetheless oblique and unpredictable melodic thinking. The added support of four highly empathetic musicians – saxophonist and bass clarinettist Fabian Rucker, in particular gets right inside the music, and pianist Benjamin Schatz, drummer Jim Black and guitarist Heimo Trixner make yeoman contributions as they enunciate the music’s message’s complex meditations on the interaction between its visceral humanity and virtual reality. All in all this is a beautiful recording with made warmth and detail, and extraordinary musicianship.