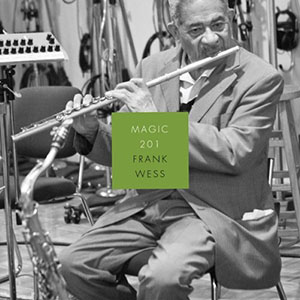 With Magic 201 Frank Wess did not simply make a companion to the record, Magic 101, he was completing what was to become his last will and testament. Not that he knew that he would not be around much longer after he made this music, but he certainly played his heart out. The result is astounding, because Mr. Wess does not sound as if he were the octogenarian that he had become. His tone on both tenor saxophone and flute is supple and warm and the gentle vibrato signs off his long loping lines. There seems not to be a tenor saxophonist alive who could play with such majesty and absolute sophistication. In fact the only two saxophonists with such singular tone and manner would have been Coleman Hawkins and Ben Webster. And on flute, there is no one today or yesterday who even comes close to Mr. Wess’ big heartfelt tone. His heartbreaking performance on “The Summer Knows” is seemingly unstoppable as he solos through chorus after chorus building an extraordinary edifice made, it seems, of lines that bend and twist like French curves. His melody then puts a décor on the song as if it was some rococo filigree and because he plays alone he owes nothing to any other musician. Yet he makes his imaginary metronome melt and dally as he bends and twists notes caressing and cuddling them as if they were the curves of a woman’s body.

His duet with the magnificent pianist Kenny Barron on “Embraceable You” is so elementally gorgeous and brims with sophisticated devices and motifs. These he seems to toss at the pianist who responds in kind for Mr. Barron is a pianist who has a transcendent voice and plays with every ounce of taste that becomes a gentleman of great standing. The effect of the two men exchanging priceless phrases as they appear to slow-dance around each other is quite special. However, that stately pace of the music is not the only tempo that Mr. Wess plays on this record. He is just as adept at something breezier, as he proves on “It Could Happen To You”. Here he has absolutely marvelous exchanges with Rufus Reid, egging on the bassist who picks up the gauntlet and walks briskly around the tenor saxophonist. And then he drops the tempo just a tad for “A Cottage For Sale” where the gentlemanly exchanges occur between Mr. Wess and the ever wonderful Russell Malone. The angularity of Mr. Malone’s chords adds shimmering colour to Mr. Wess’ earthy tones.

Frank Wess lived a good life. So that when he celebrates the blues as in “Blues for Ruby” they are not the low down dirty rotten blues, but a blues played by an erudite musician who has lived through it all to tell a cautionary tale with good humour and a smile. Yet, Mr. Wess is probably at his very best when he is elegiac, playing a ballad. It is they that the magisterium that is Frank Wess shines through. Great, if not equal credit must go to Kenny Barron, Mr. Malone, the bassist, Rufus Reid and percussion colourist Winard Harper, who seem to be inspired choices for this date. Their performances are absolutely flawless, which must have pleased Mr. Wess to no end as he absolutely played his hear out throughout this session.

Track List: It Could Happen To You; A Cottage For Sale; After Paris; The Summer Knows; Embraceable You; Blues For Ruby; If You Can’t Call, Don’t Come; If It’s The Last Thing I Do.