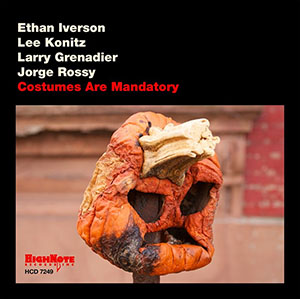 The group Bad Plus has such high recognition—both for its singular musical sound and the manner in which the players interact within that trio—that when individual members break for a solo project the world sometimes turns upside down. It happens every time Drummer Dave King puts out a record and, happily, this is exactly what seems to have happened with pianist Ethan Iverson’s solo venture Costumes and Mandatory with the great alto saxophonist, Lee Konitz and the miraculous bassist Larry Grenadier and drummer, Jorge Rossy. Having Lee Konitz play on your record means that good becomes great, as Mr. Konitz is a rare individual: crusty, but with that characteristic warm and wry tone from an instrument that most practitioners seem to attack rather than caress the reed, as Mr. Konitz does. This enables Mr. Konitz to grapple with emotion, not merely play with it; and that means he can disarm and arrive at a careful vivisection so that he separates chaff from the heart and soul of the feeling that triggered off the emotion in the first place. Then he finds the notes; the phrases and lines to express how it feels, ripping into the heart, for instance, on “Try a Little Tenderness,” where he plays with such elemental melancholia that he breaks that heart, or on “Body and Soul” where he does not merely reinvent the ballad, but grapple with the devil of a body and dive into the formlessness of the soul, always eschewing sentimentality. Moreover there is the blues, something Mr. Konitz and the rest of the ensemble, but especially Mr. Konitz, played with as much essential sadness as it is with joy on “Blueberry Ice Cream”.

However it is easy to almost miss the fact that this is an album which weaves in and out of the classic theory and practical experience of playing with an icon of music: the late pianist Lennie Tristano. Mr. Konitz was a student and a musical companion. Ethan Iverson may not have studied with the pianist, but he is nevertheless an assiduous student of the great man’s theories and processes and this runs through the record, barring the obvious exceptions which Mr. Iverson mentions in his notes. It does bear mention, however that when playing the charts inspired by Lennie Tristano, truth be told it appears that the ghost of the bebopper has come to life. Ethan Iverson has what seem like hands that can go independently of the central nervous system and like another great pianist: Brad Meldau, Mr. Iverson is able to command right hand to play melodies and to harmonise independently of his left hand. This is quite a feat and suggests pianism of a higher order, especially on “Blueberry Ice Cream” and on “Blueberry Hill.”

This magnificent record would have been all the poorer were it not for some of the finest bass-playing by Larry Grenadier. Mr. Grenadier’s fingers sizzle and pop as he makes his bass sing and growl all in one voice. He is one of the most sensitive bassists and bears out this testimony in his extraordinary duet with Lee Konitz on “Body and Soul”; This is a song that is played in so many situations and in a myriad of variations and combinations, but this version with Mr. Konitz and Mr. Grenadier is easily one of the most definitive versions ever likely to be heard. It is true that when musicians make a record, they can only expect to stick to a script however loose it may be and hope for the best, but on this one there are four of the most creative musicians engaged in unexpurgated improvisation and this makes for rare musical excitement because the next phrase seems to come from something like a spectral source; and the link to that previous phrase is so tenuous that it could make or break the architectural link in the music. Happily the movement is so perfect that the music soars to a rarefied realm.