During the course of your mission as a music critic you might come across numerous recordings that are really good – even great. But every once and a while you will chance upon one that is so compelling and fulfilling that you might so want to walk down the street giving away copies for free, just so that everyone might have the opportunity to listen to it, receive its message and be uplifted by it. The New Immigrant Experience – Music Inspired by Conversations with Dreamers by the Felipe Salles Intercontinental Ensemble is one of those endeavours that calls for such an act. The gripping narratives contained within, superbly relocated to the landscape of music, which is then performed and to perfection are, in sum, the reason for its demand to be heard. But there is, so much more to this event; so much nuance that could get lost – but isn’t – in the great wash of US and world events that we are drowning under today. 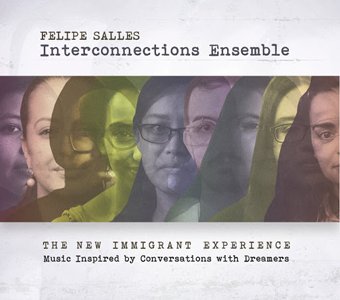 First, though, Mr Salles must be congratulated for keeping his eve on the issue of undocumented immigrants in the US – the Dreamers as they are euphemistically called – long after it has ceased to be a “media event”, and also reminding us that it is a much deeper story than merely a matter of immigration law. The main body of this work is contained in nine stories – each from real (properly identified) undocumented immigrants in the US. The stories are told in camera to Mr Salles and it was a master-stroke for him to conceive of a way of telling them with the both a DVD and CDs (there are two in the set). The DVD ends up being absolutely essential to the experience of this project and so we will review it first.

Here too we have what seems to be a conscious effort to create an in-your-face experience with no attempt to use filters both of a technical or a metaphorical kind. And it ends up being a master-stroke on the part of cinematographer and director Fernanda Faya. The camera is held steady, right up and into the face of each of the interviewees who have been identified by full names in each instance (see list of song titles below). There is no attempt to pull or cut away when they pour their hearts out to Mr Salles during their interviews; no attempt to dissolve into a fanciful idiomatic re-interpretation of the narrative; just a steady hold on the often teary emotion in the eyes. The ache in their voices clearly comes from a deeply interior place and is eminently palpable. Most shockingly of all is the truth in the revelation (not only felt by them, but by us as viewers too) that they are just as much part of the citizenry of the United States and the world – human beings just like any of us.

Narratives are brutally honest. There is no attempt to “act” for the camera, which captures every nuance in eye and lip movement, speech and silence. The soundtrack captures emotions so vividly because the camera is so close-up that and subtitles, though unobtrusive, seem unnecessary although these often serve to punctuate what the camera captures. Dialogue editing is beautifully timed. The best part of the editing is, however, the cutting away to live music – performed and recorded at The National Sawdust Theater. The timing of cutting away to music is so perfect because it enables the viewer to breathe out after he or she may have held his or her breath (often) throughout the individual, gut-wrenching interview. (I was certainly one of them). This leads us not only to the live music but, as we would discern, to a moment in the score perfectly suited to the mood, emotion and narrative we’ve just been listening to.

And then there is the music…Mr Salles clearly feels these stories. His involvement in them is evident from his deeply empathetic score, which isn’t a score really for that would give the impression that his music is merely the soundtrack to the story. His music is the story. It includes the thunder of drums and rumble of bass when he intends to tell us about something truly brutal. His trumpets soar when he is describing a particularly joyful, ebullient aspect of being set free by coming out of the shadows. The trombones gurgle and cry mournfully when singing a dirge about loss or death. And best of all this is a sublime ensemble effort by an orchestra playing loudly and with uncommon feeling and intensity, clearly telling us that they too live the experience of the undocumented immigrant as if each nuance of each story was their own.

This is a master-stroke on the part of Mr Salles who clearly knows exactly the depth and immensity of this story and how it absolutely must be told again and again. This is why there is not one, but nine stories placed back to back driving home the tragedy of the undocumented immigrant relentlessly. Also, and equally importantly, the release of this disc comes at a time when mainline media have long since abandoned the story of undocumented migrants to the US because it is one that no longer gets the ratings that newspapers and television have an insatiable appetite for. This is so much more than Mr Salles’ magnum opus. Indeed even if Mr Salles never made another recording in his life he could rest happy with this one for on it will rest his reputation as an artist committed to telling the buried (human) story of both tragedy and beauty that must continue to be told until change comes to our inner selves.