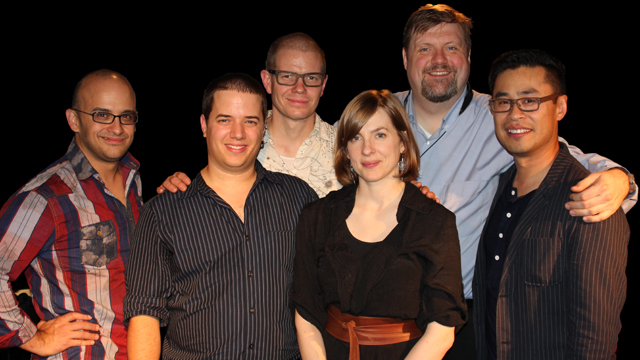 I recently listened to a recording by a drummer and leader of a band and I shall not reveal which one it is for fear of letting the cat out of the bag re: the drummer in question. Anyway what I wanted to say about this disc was that it began with a drum solo and then featured soli on all of the tracks of the album. Such gratuitous publicity, I thought and, as it turned out such meaningless drumming. The point I wish to make here is that Ernesto Cervini, the Toronto-based drummer would never resort to such tactless drumming. He is too polished a musician for that. Mr. Cervini is also remarkably inventive. He is more intuitive than he is intellectual so that there is much more of a visceral rhythmic excitement to his music, and there’s a similarly enigmatic relationship with tonality. The language is also expressive in an angular and therefore less linear and as often darkly passionate and intimate as it is bright exuberant—especially when he is playing with this group. This is exactly where Ernesto Cervini is at with Turboprop an album that draws from so many sources it might well said to examine the nature of connections. 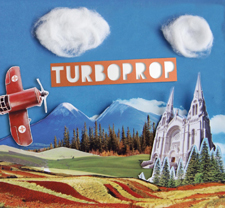 Connections indeed. This excellent album is like an elegant railway system linking jazz, folk, Latin, early 20th Century impressionistic and the chamber music style of the post-serialist 20th century conservatoire. But to describe it as such gives the impression of overcooking when in fact the whole project is a masterpiece of subtlety. Ernesto Cervini’s take on the lineage of the cool spacy drums is less than conventional here, summoning more melodic tones from the instrument which floats benignly over the sound of a woodwind-driven ensemble that in its turn adds a rich and not entirely predictable rhythmic foundation to the music. The surprises, when they come, are effective, but discrete: a gamelan-like riff is played as pizzicato harmonics, a delicate curlicue of a bass line underpins a contrapuntal Gaelic lament, and a close-knit ensemble passage develops from a single phrase. The opener, a quizzically named “Unnecessary Mountain” is a joyous dancing piece which engages you. It is followed by Charlie Parker’s “Red Cross” that jumps and twists magically as only a “Bird” composition can.

A few doors down is “Three Angels” a slow, slightly mysterious ballad edged with a rueful feel. This features thoughtful, inspired and melodic soli by Tara Davidson and Joel Frahm which remind me a little of the ballad-work of John Coltrane as in “Naima”. As usual the drummer continues to ring in the changes in mood, structure and tempo, making for a constantly interesting programme. The considerable degree of balance and integration of melody, harmony and rhythm, of composition and improvisation, of exploration, individuality and tradition is impressively maintained throughout. The recorded sound balances detail and warmth. A must-have album if ever there was one.

Drummer Ernesto Cervini is making a name for himself as a consummate bandleader and in-demand sideman, repeatedly praised for his deeply musical, infectiously energetic talents. Time Out New York encapsulated Cervini as “a buoyant drummer as well as a sharp composer and bandleader,” while the jazz bible, Downbeat described his fluid style as one that “exemplifies `float like a butterfly, sting like a bee’.” Read more…