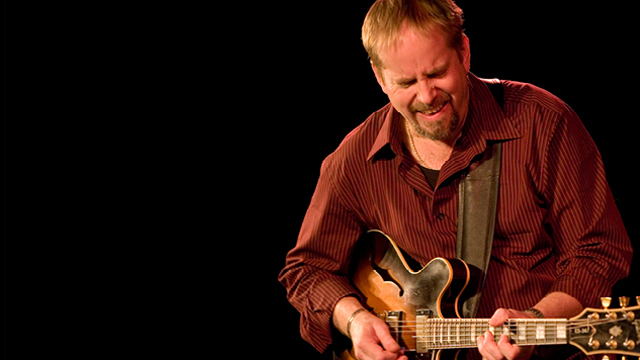 This is quite simply one of the finest gifts that one musician could give to another. Okay. So Dave Stryker spent many years playing with Stanley Turrentine, learnt many of his songs, and even played them every day, perhaps. But to play them to a musician as if he were alive today and to play them with such devotion and so much soul is quite another matter. These ten songs played in tribute to a master come from the heart. When I listen to the music here, I feel as if Dave Stryker were standing beside me and more than anything else, I can almost feel the breath of the saxophonists who blow their hearts out for a tenor saxophonist – Mr. Turrentine – who meant so much to so many musicians. If you can forget for a moment – and I can vouch for how difficult that really is – if you can shift focus to Stanley Turrentine’s long-time guitarist for a moment you will hear just why Mr. T loved having him in his band. 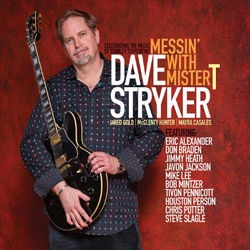 Dave Stryker is an extraordinary musician. He is a musician with impeccable taste and an astounding sense of time and place. Every note, every pause, every sound and every silence is right where it should be. There is no over cooking here. Dave Stryker plays with great virility even when he is crying the blues, projecting even the most easy-going piece with a force and conviction that will take your breath away. But the guitarist plays with extraordinary gentleness and with soul as he does in his introduction to “In a Sentimental Mood” dropping the use of vibrato in favour of a grey whispering tone at the most moving moments of this splendid Duke Ellington piece. It is a cue, if anything, to glide, as if on an immaculately waxed floor with the tenor saxophone of Jimmy Heath. I am reminded here, of two grand masters in the throes of Tái Chi. The pace of the piece, whose bottom is held together with some of the most grandiose B3 organ work by Jared Gold, is like an aching heart – almost too painful to bear. But it is beautiful and memorable.

Of course, not all of the pieces are slow and locked in an interminable dance as this one is. “Impressions” for instance is brisk and played with marvelous grittiness by both Chris Potter as well as Dave Stryker, as is “Gibraltar” played with another truly extraordinary saxophonist – Bob Mintzer. The airy fleetness and meticulously controlled dynamics; the hushed pianissimo and the ferocious fortissimo are profoundly conceived and memorably executed by both the tenor saxophonist and Dave Stryker. The piece is also a model example of the mutations of tone colour – a truly wondrous experience. At every turn each piece is played to perfection. Each saxophonist seems to be picked specifically with that song he plays in mind. And through it all there is Dave Stryker, who exercises his beguiling touch on six strings and it is this combination of guitarist and saxophonist that makes for an edifying experience. And let’s not forget the superb Hammond B3 and masterful drumming by McClenty Hunter and percussion by the ineffable percussionist Mayra Casales who make invaluable contributions to this extraordinary project.

Whether you’ve heard guitarist Dave Stryker fronting his own group (with 25 CD’s as a leader to date), or as a featured sideman with Stanley Turrentine, Jack McDuff, and many others, you know why Gary Giddins in the Village Voice calls him “one of the most distinctive guitarists to come along in recent years.” He was recently voted once again one of the Top Guitarists in the 2014 Downbeat Critics and Readers polls for the 7th time. His most recent CD “Eight Track” was also picked as one of the Top Albums of 2014 in the Downbeat Readers Poll. Read more…