Home Music Enoch Smith Jr.: To Houston With Love
Enoch Smith Jr. 2018 album is just as alluringly brilliant as his other recordings. It is, as one would expect, rooted in his deep and prophetic spirituality and is redolent in the gleam of the Hammond B3 organ and the heraldic accoutrement of the Holy Rollin’ church. But while it seeks to extol; indeed even glorify the redemptive qualities of spiritual fervor and belief, it also brings damnation on racism – still prevalent in the USA – with a bitter song about the practice: “Freedmantown”.

It does not take much to recognise that Mr. Smith is one of the most prodigiously gifted pianists, but he ought to be recognised as an even greater – a word used with due consideration – composer. Six of these eight works have been written by him. Of the others one – “Wade in the Water” – is a traditional spiritual and the other – “The Water (Turn the World Around)” – is a celebration of the earth’s 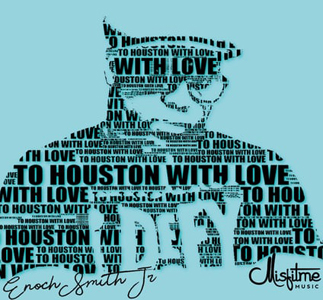 life-giving waters by the legendary Harry Belafonte. But here, it is Mr. Smith who holds court with each of his remarkable songs as we ponder “waters that giveth and taketh away” in the context of Hurricane Harvey that killed almost 100 people and all but destroyed Houston.

From the highly-charged version of “Wade in the Water” which reminds us that the world’s water is first an elemental baptismal fount, we are plunged into the terrifying darkness of “Drown” with the soaring counter tenor of Estee Bullock who leads the call to bereavement. But the profound calm of spirituality prevails in the pain and travails of “Love Callin’” and “Take Me Home”. The contemplative aspect of Mr. Smith’s music is elevated in “A Minor Melancholy” before, that is, we are reminded once again of the tenuous nature of the emancipation of Black Americans in the South through “Freedmantown” as we tour the Fourth Ward of Houston.

Both words and music – in its gentle swing – are meant to (and have) their desired impact as the song stops the breath especially in the melding together of Mr. Smith’s high and lonesome vocals and the rousing gravitas of the Hammond B3 organ. The simple lyrics contribute much to song’s powerful allegorical tale in as the imagery shifts from the lynch-rope around the martyr’s neck to the hands that build the freed man’s towns, notably the whole of the Fourth Ward, which Harvey has come to ravage.

The lull in the storm is crafted into the sardonicism of “To and Fro” as the album closes on the ever-hopeful note typical of Mr. Smith’s faith, which is superbly crafted into this superb album. And while his soaring musical voice reaches an elevated plane in the rarefied realm, he is never alone. Much of the musical heft of this performance also comes from drummer Reggie Quinerly, vocalist Estee Bullock, bassists Gabriel Vivas, Jordan Scanella and Vicente Archer, as well as saxophonists Matt Parker, LaQuin Lay and the mighty Myron Walden, as well as trumpeters Carlos Nwankwo and Antoine Drye. This musical Gospel is after all the shared experience of all who submit to its power.