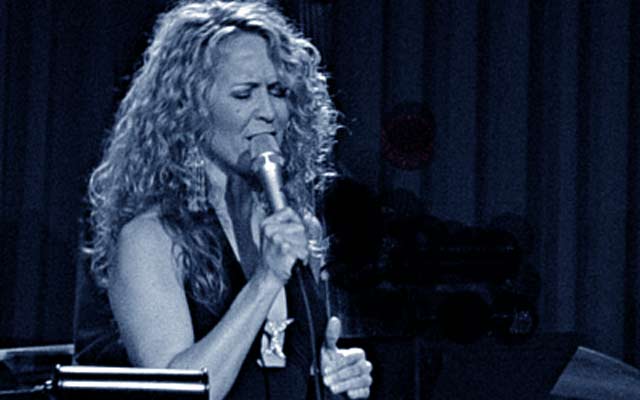 If you haven’t already then it is time to discover the vocalist Ellen Johnson. This disc is a great place to start. It is a superb recital and reveals songs which abound in glorious textures, evocative word-and-wordless-settings, and audacious harmonies, lusciously sensuously in their invention, and enigmatic as ever. Such creativity, such mighty melismas with cascades of arpeggios and death-defying glissandos deserves hysterical adulation. How else would you reward music full of operatic glamour sung by a talented singer with a diamantine tone, dramatic flair and free-soaring top notes which Ms. Johnson provides in spades? 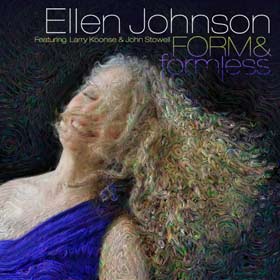 Yes indeed, even at their most chaste, these songs have an operatic expansiveness with the ‘formless’ versions featuring jazzy colouratura. They often become – especially in the case of Charles Mingus’ “Weird Nightmare” elaborate dramatic monologues, while in the smokily atmospheric “Sonny’s Isle of St. Thomas”, declamatory recitative alternates with pungent snatches of rhapsody. Yet several of the songs here are models of economy: the whirlwind early setting of Thelonious Monk, whose harmonic shocks are the perfect musical equivalent of the pianist’s melodramatic original. And then there is the almost impressionistic “3-lonious Bunk” where Ms. Johnson’s voice dissolves into iridescent sequences of pulsing chords.

Here as elsewhere the poise and purity of her sustained high notes and low ones is a priceless asset. Ellen Johnson also excels in intimacy, singing John Coltrane’s “Naima” with unsentimental tenderness and balletic grace, spinning a line of silken delicacy in the secretive “Fiona Flanagan’s Fable”, a little gem of a piece. Ms. Johnson can also perfectly catch the ecstatic agitation in her other original compositions. And her blissful languor sometimes contrasts later song settings also bringing an almost delightful hysteria, scorn, even outrage, when the music demands it.

A born stage animal and story-teller, Ellen Johnson is equally In her element in songs with words, which are naturally flamboyant and dramatic. She times and colours lyrics to perfection. In themes of melancholy and mystery she veils her naturally bright timbre, dream-like indolence of a sleeper and also sneering bitterness. Such a wide range of emotion is almost impossible to accomplish in a single voice. A word here, too, for the ever-observant guitarists: they are both vivid colourists and scene-painters who show plenty of temperament in their evocations.

Ellen Johnson’s mastery of a supple ‘bel canto’ line is eloquently displayed in “Nature Boy’ where she infuses siren calls with insinuating sweetness, is sung with delicate sensuality and, as ever, an acute awareness of harmonic colour, a tenderly softened tone and extraordinary modulation. She can sometimes dramatise individual words at the expense of a liquid ‘legato’ as in the limpid opening of “Infinity Is Forever”. But she lives each of these songs intensely, her singing by turns softly fiery, exalted and rapt.

How much, too, this music gains from Ms. Johnson’s graceful preparation and perfect placement of top notes (for example the soft high G sharp and a subtle descent at the beatific close of a line in “Corky’s Caper”) is especially lovely. The fact that this is a beautifully recorded disc, happily, with no notes to prepare you for what’s coming makes for an extra element of surprise.