Whenever one comes across the words “rare and unheard music” even if it’s in the subtitle of a recording one cannot help wondering why the music in question is “unheard”? In the case of the music of Duke Ellington, this assumes even more significance as Mr Ellington recorded extensively over decades and on many labels; so much so one might begin to even suspect his motives for keeping the music “rare and unheard” – under wraps, so to speak. Did he not like some of the music enough to have it recorded? Had he forgotten he’d written it? Did it just not fit into the repertoire that his albums consisted of over the years? Or was The Master simply waiting for the opportune moment when, like rare wine, the music would mature just as he liked it for him to uncork the bottles, letting the genie out of them, as it were?

It was probably all of the above, although one always hopes it could have been a dash of the latter. At any rate, “rediscovering” Ellington is always something to look forward to. Nothing The Duke ever wrote had an expiration date on it and this music by Garry Dial, Dick Oatts, Rich LaRosa together with the WDR Big Band, ReDiscovered Ellington: New Takes on Duke’s Rare & Unheard Music sounds fresh and wonderfully new. 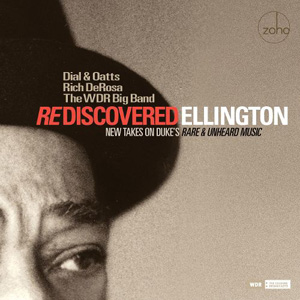 Mr Dial, Oatts and LaRosa have put their own spin on events as have the musicians of The WDR Big Band, and even if the music provides only teasingly brief whiffs of Ellingtonia (as we know it) every now and then, it is still a welcome addition to the enormous library of Mr Ellington’s literature.

Devotees of the music of Mr Ellington are always spoiled for choice when it comes to fine recordings of his famous works. But these are not so famous. Even so Garry Dial, Dick Oatts, Rich LaRosa, with The WDR Big Band, make this offering of vividly recorded performances drawn from works covering a period from the mid-1940s to the 1970s stand out as formidable achievements. They match technical mastery (of Duke’s bands) at the highest level with profound insight. No less impressive is the compelling interaction between Garry Dial, Dick Oatts and the excellent WDR Big Band under Rich LaRosa, a crucial component in music that is so symphonic in design, as Duke’s music always was. The Big Band’s contributions to the dialogue are always carefully shaped and fully responsive to the subtle nuances of the soloists’ exquisite phrasing throughout these remarkable performances.

To this extent it bears mention that The WDR Big Band soloists, who are listed in the liner notes, but are not nearly praised enough. For instance Karolina Strassmayer’s alto saxophone solo on “Kiki” is inspired and poignant. Miss Strassmayer displays uncommon virtuosity at a level seldom attained by many on the instrument. But more; she is acutely responsive to the music’s changing moods, and expresses them with an enormously varied tonal palette. John Marshall’s solo on the same song does garner praise and rightfully so and in his consistently full-bodied, flaming sound he brings a sense of monumentality to the piece that it so richly deserves. Of course it’s hardly appropriate to suggest that Mr Dial and Mr Oatts stunning negotiation of the works is not memorable.

At the end of the day it is all of the players from Mr Dial and Mr Oatts and the musicians of The WDR Big Band guided by Rich LaRosa who make the strongest possible case for this music seeing the light of day (again in the case of pieces performed before, albeit rarely). Between them, the musicians deploy the widest possible range of colour, dynamics and articulation to this music by The Duke and if I remember correctly, this is one of the hallmarks of the Ellingtonian repertoire, which is probably the reason why, as The Duke’s granddaughter, Mercedes Ellington puts it, “He would be proud”.