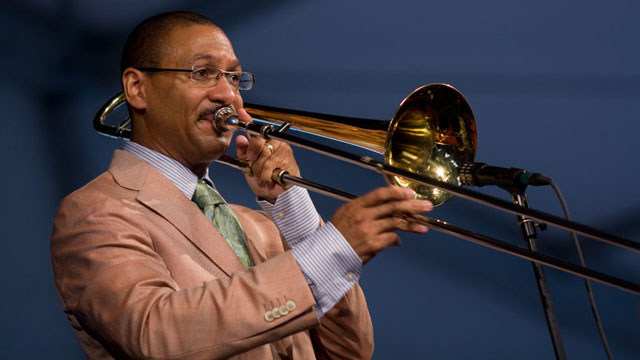 Anyone picking up a copy of this package, The Last Southern Gentlemen is likely to be faced with a difficult choice: Read the notes first? Or listen to the music? It is not possible to do both, for both are equally absorbing. So the music first then? Now things are about to get a bit easier, and difficult. Easier because focussing on the guts of this package means getting seduced by its overt charm is instant. All it takes is one note. Just one note; a plaintive bleating sound from the trombone of Delfeayo Marsalis’ instrument of choice and the mesmerism begins. This wicked enchantment comes in torrents. Not because he plays hundreds of notes crowded into a phrase, but because what he plays rushes breathtakingly as if his melodic river is in spate beckoning onward; upward… There is a gracefulness and sweeping beauty that gets more pronounced and the notes and phrases escape the bell of Mr. Marsalis’ trombone, pirouetting in the air above the room where it is hears. There they are suspended as if lost in time and then they fall gently as dew to settle in the mind and in the heart of the resoundingly seduced… 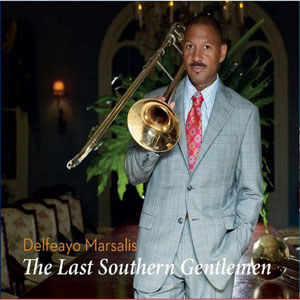 Delfeayo Marsalis is a Southern Gentleman. His musicianship has an old-world charm to it. His music has etiquette. His playing is gracious as it engages the piano, bass and drums in this ensemble and although they are not present a chorus of voices—strings, brass and woodwinds and vocal—is heard in almost symphonic overtones. “She’s Funny That Way” is a terrific piece. Here, notes from his trombone mingle in neat turns of phrase—and this is derived from the lightness of his interpretation of melody—with a certain piquant harmony. Almost elusive references to the pastoral nature of Southern society are made throughout the exegesis of “Speak Low” and “My Romance.” While “Nancy” and the sensuous devolution of melody to the expert pianism of his father, Ellis Marsalis, powerfully evokes a certain emotional extremism, embedded in the music’s very structure. And then there are the phantom harmonic thunderbolts with which the younger Mr. Marsalis attacks these familiar songs. The power of his attack is felt in the masterful splendour of elementally beautiful brushstrokes on a panoramic musical canvas.

And then there is the magic of those other kind of notes: the liner notes—as profoundly literary as the music. Delfeayo Marsalis shows himself to be a writer of no mean capability and accomplishment as well. His gift for telling a story—be it with his music or with the written word—is exquisite. There is an almost baronial splendor that is evokes by these notes; of a landscape that, though weighted on the wrong side of history, has a charm all its own nevertheless. But it is the storyline and how it is interminably entwined with the music that sets this package apart. Both retain an air of mystery, despite all of the overt exhibitions of benevolent southern charm.

Finally, this critique would be remiss without acknowledging the great pianism of Ellis Marsalis. The utter beauty of his playing, his sense of belonging to the continuum of the piano, and his absolute mastery of the idiom is (very possibly) the reason why his children have their own sense of history. The playing of bassist John Clayton and the percussion colouring of Marvin “Smitty” Smith is also a reason for the premier quality of this music. The recording also needs to be commended with its use of the “dreaded” bass direct—an innovation that Delfeayo Marsalis himself is responsible for—but then it is nothing new for a Marsalis recording to be technically proficient as well as musically sublime as well.

Track List: The Secret Love Affair; Autumn Leaves; She’s Funny That Way; Sesame Street; I’m Confessin; But Beautiful; Speak Low; Nancy; The Man With Two Left Feet; That Old Feeling; My Romance; If I Were A Bell; I Cover The Waterfront

Delfeayo Marsalis is one of the top trombonists, composers and producers in jazz today. Known for his “technical excellence, inventive mind and frequent touches of humor…” (Leonard Feather, Los Angeles Times), he is “…one of the best, most imaginative and musical of the trombonists of his generation.” (Philip Elwood, San Francisco Examiner.) In January 2011, Delfeayo and the Marsalis family (father Ellis and brothers Branford, Wynton and Jason) earned the nation’s highest jazz honor – a National Endowment for the Arts Jazz Masters Award. Born in New Orleans on July 28, 1965, Marsalis was destined to a life in music. Read more…