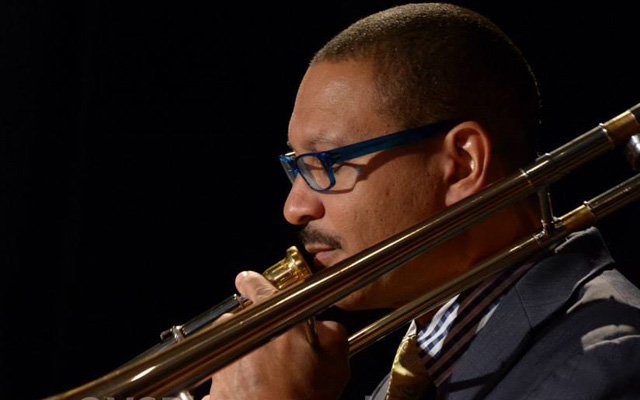 Reviewing this album by Delfeayo Marsalis after the results of the 2016 US Election is especially significant. The tongue-in-cheek aspect of its title is slightly diminished now and in its place is – at least one would think – a slightly more strident and certainly more urgent message. The dry sardonicism of the narration on its title track becomes more poignant. And one simply cannot misinterpret the easy swing of the music on the disc as just ‘another day at the office’. Nor should it ever be. Art is more than news; it is socio-political commentary. And Jazz might just wrest the initiative from Rap and Hiphop and become the ‘Guernica’ of Black American music that it once was. When the drummer Mark Lomax III unleashed his righteous rage on Black Lives Matter in 2015, he certainly gave notice of this. 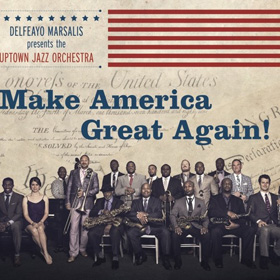 Delfeayo Marsalis’ Make America Great Again may not be as angry a musical report, but it attempts to speak to the greater movement that has now seized the America. In the face of what is looking more like a Fascist façade – I am loathe to call it a Fascist State yet – Marsalis’ disc carries a heavy responsibility to hold a mirror up to America. This it certainly does. It reminds Americans wordlessly but ever so evocatively that they live under the ‘Star Spangled Banner’ and all that it stands for right out of the gate. The glorious arrangement of the brass and winds, the bass and drums captures particularly beautifully – in the clarity of phrasing and articulation – the power of human voices raised in unison singing, as it were, ‘…the land of the free/and the home of the brave’.

‘Freedom’ is the recurring theme throughout the programme. In the lightness and suppleness of ‘2nd Line’ that grows into the texturally heavier, yet fluid gravitas of ‘Back To Africa’ with its triumphant rap that calls for a return to another kind of freedom: one that can only be felt in mind and spirit – the life-force that is ‘Africa’. The profoundly beautiful ‘Dream On Robben’ imagines what might have gone on in the mind of Nelson Mandela as he transitioned from prisoner to freeman. ‘Living Free Running Wild’ and ‘Skylark’ imagine freedom – the former more cerebrally and the latter idiomatically. And what better way to express this yearning than in the elastic ebb and flow of improvisation – the driving pulse of which is contained in the hefty, full-blooded sound of Jazz? As majestically as it began, Make America Great Again ends with Aaron Copeland’s ‘Fanfare For The Common Man’ – a soaring, poetic expression of hope.

While there is certainly an intellectual element to the programme, there is also a visceral excitement that comes from its expression in the form of Jazz, sui generis to the African-American artist. In Delfeayo Marsalis’ compositional facility, in his wry humour, tempered throughout by the upbeat nature of his music; using rap without the stridency of hiphop we have not only a vision of what might make America great again, but also a fine example of what it takes to make excellent Jazz in the process.