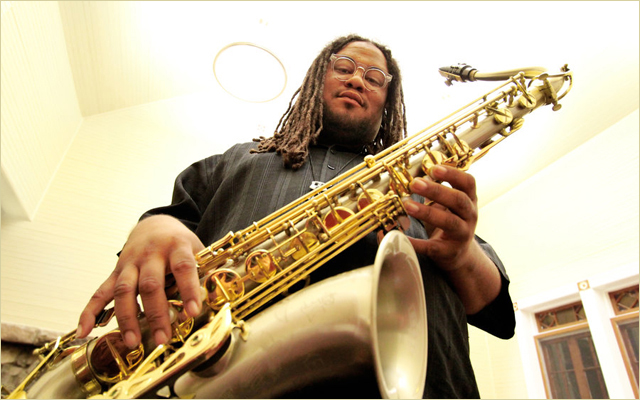 To listen to these nine masterpieces on Gratitude by Dayna Stephens is to be struck by the music’s wonderful originality and inventiveness. It is to be noted that only one of the pieces is a song composed by Stephens, but that hardly matters. There is not a single movement here that isn’t stamped by Stephens’ genius – from the smoldering balladic improvisations of “Emilie” and the dense harmonics of “In a Garden” and “Amber is Falling” to the energetic fugal episodes of “Clouds” including its astonishing valedictory last movement (from Louis Cole).

To be sure this quartet of Julian Lage, Brad Mehldau, Larry Grenadier and Eric Harland play every note as if it were the last one they would play on earth, which makes their playing deeply felt and urgent. Moreover, the subtlety of articulation and elasticity in the playing of Dayna Stephens – whether on tenor and baritone saxophone, or EWI, synthesizer or bass (on “Clouds”) creates 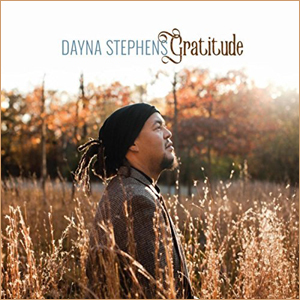 an emotional narrative sweep to this music making it breathtakingly alive from the aching lines of Julian Lage’s guitar on “Woodside Waltz” right down to elemental howl of Stephens’ horn on “Don’t Mean a Thing at All”.

There are a number of EWI-playing aficionados who have become acolytes of the instrument after Michael Brecker threw down the gauntlet to saxophone player but I can think of no one who conjures the Juliet of Shakespeare’s iconic tragedy better than Dayna Stephens. If you give some time to “We Had a Sister” you will hear something special in Stephens’ second solo (after Brad Mehldau’s) in the heart-on-the-sleeve romance as he submits absolutely to the song’s quietude. This sets up “The Timbre of Gratitude” and its dream-like tempo. Colours bleed, edges blur and memories flood in.

Dayna Stephens he leads the others into the memorable magic of “Isfahan” taking the poetic largo of its choruses to the utmost on his baritone saxophone while the rest of the players keep the textures spacious and poignant. The “Clouds” diptych is memorable not the least because of the manner in which Dayna Stephens uses the tenor saxophone, the EWI, synthesizer and bass in a seemingly imperious manner as Eric Harland responds to the trembles, hums and evocations with a tremendous head-rush before Larry Grenadier is ushered into the ghostly outer movements.