Home Music Daniel Bennett Group: We Are the Orchestra

One might not be entirely sure why Daniel Bennett has decided to call this recording by a multi-instrument-performing duo We Are the Orchestra, but taken with a grain of salt, one assumes that it is with tongue firmly in cheek; and it works reasonably well. Besides, even under the useful guise of multi-tracking, this refreshingly wonderful programme of songs turns out to be not just unusual, but highly entertaining and rather artistically accomplished as well.

The music, almost completely composed by Mr Bennett (two of eight songs are re-imagined works by Giuseppe Verdi and one is co-authored with Mark Cocheo), are conventional enough to evoke folk song and dance through their uncommon lyricism of melody and distinctive dance patterns embedded in the rhythmic structure. Coming as they do after Mr Bennett’s celebrated score for Whitman at the Whitney 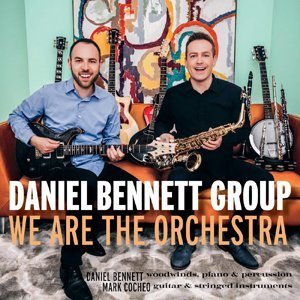 the music of We Are the Orchestra is distinctive and absorbing. Moreover the performances by both Mr Bennett and guitarist and banjoist Mr Cocheo are expressive and full of ideas.

Perhaps the surprisingly-named album is a bit of a distraction to the extent that if you as a listener were led to expect an “orchestral sound” as a result of that you might be led astray. It is, after all a duo and they do multi-track several wonderful contrapuntal passages; yet the harmonic content is strong and ultimately animated and dramatic as well. High points include Mr Bennett’s apparently effortless sparkle and clarity in the whirling manner in which he helps unfold his part in the melodies and the heartfelt intensity over all of the humour of “Refinancing for Elephants”.

Mr Cocheo quibbles his way tremulously through his parts in the repertoire and – seemingly playing the “Carl” – on “Carl Finds His Way” finally cuts loose with a considerable degree of raucousness in the golden-toned eloquence of his guitar-playing. Overall the fizz and verve of the music jumps off the page most gratifyingly, propelled, no doubt, by the verve of the duo who together bask in the glow of music that is a mixture of driving energy, tenderness, humour and bounce; much more than you will find on a vast array of music these days. As a bonus, the sound quality throughout the disc is bright, clear and balanced for warmth.