The magical osmosis that occurred between Gil Evans and Miles Davis continued long after the epic recording collaboration between the two giants of music which began with The Birth of the Cool sessions between 1949 and 1950, eventually released by Capitol in 1957. Mr Evans’ arrangements not only infused atmosphere into trumpeter’s iconic voice and the high and lonesome phrases that punctuated the dense harmonic wall of brass and winds, but his own writing also reached critical mass as its dynamic harmonic method propelled Mr Evans into a visceral world of funk, replacing the sharpness of swing with a raw and granular kind of shuffle. In any event, like Mr Davis, change was inevitable for Gil Evans and this legacy has continued to keep his voice alive through the orchestra that he formed; now under the direction of his son, Miles Evans.

Hidden Treasures helmed by the younger Evans and his brother Noah, who has been instrumental in keeping the flame of The Gil Evans Orchestra alive through Monday Night concerts, continues from where Mr Evans left off after Paris Blues with Steve Lacy (Owl, 1987) and Live at Umbria Jazz Volumes 1 and 2 (Egea, 1987) {although Ryan Truesdell also began The Gill Evans Project in 2012 with the blessings of the Evans Family Estate and recreated a slew of the Master’s charts on Centennial (ArtistShare, 2012), followed up by Lines of Color: Live at Jazz Standard (ArtistShare/Blue Note, 2015). 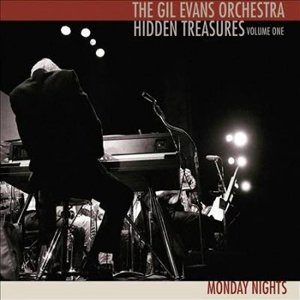 Not that we needed any reminder of the fact; but Mr Truesdell’s recordings and now, of course, Hidden Treasures confirms the veracity of the legacy of Gil Evans’ unique music.

It is an eloquent and characterful repertoire that seems to emerge from a similar wellspring that is impressionistic and Ravel-like with a vivid overhanging of harmonic cumulonimbus variations creating narratives and tone poem-like settings not too dissimilar from the ones created by Jean Sibelius and the symphonic work of Bedřich Smetana. On the repertoire of Hidden Treasures, of course, Miles Evans and The Gil Evans Orchestra bring (the added element of) irrepressible swing and – something only described by the shuffling feeling of – the word “funk”. What is also wholly unique about this recording is how much musicians today have imbued the system – for it is just that – that Gil Evans instituted in the world of music. Here’s an indication: of the seven charts recorded on the album, all but three have been penned by Gil Evans and Miles Evans. The rest have been written (and certainly emerge) in the full-blooded vein of the Master.

Even more praiseworthy is the utterly organic manner in which this ensemble has seemingly refloated the Gil Evans sound decades after Gil Evans’s last recording, and that too without sounding like a clone of his last band. All of this makes Hidden Treasures shepherded by Miles Evans seem to stand, awestruck, on the threshold of a new musical universe not too dissimilar from the classic one that Gil Evans created. This is music – from Pete Levin’s chart, “Subway” and Delmar Brown and Alex Foster’s “I Surrender” to the inimitable John Clark’s “Groove from the Louvre” (Could there be a more Gil Evans-like twist to a title?) and Masabumi Kikuchi’s “Lunar Eclipse” – created and refined in the style of Evans. Clearly Noah and Miles Evans have got Gil Evans’ huge and seemingly sprawling musical canvas better than most with their long and thrilling crescendos which open out at the climaxes which, in turn, soar inexorably into the stratosphere.

The sense of stepping out into an immense, mysterious space is maintained by the musicians of the orchestra from veterans like the incomparable Mr Foster, John Clark, Dave Bargeron, Dave Taylor and Shunzo Ohno to outstanding younger musicians such Mino Cinelu (a masterful solo characterises “Lunar Eclipse” forever), Kenwood Dennard, Matthew Garrison (whose flash-point-solo is absolutely and viscerally exciting on “LL Funk”). The giant scale of this music and its purity of conception finds magnificent expression at the hands of all of the musicians performing here, who combine a kind of lush Evansian ardour with the kind of mystical austerity both of which don’t just cohabit but, magically, fuse completely. Clearly this is an album to die for…