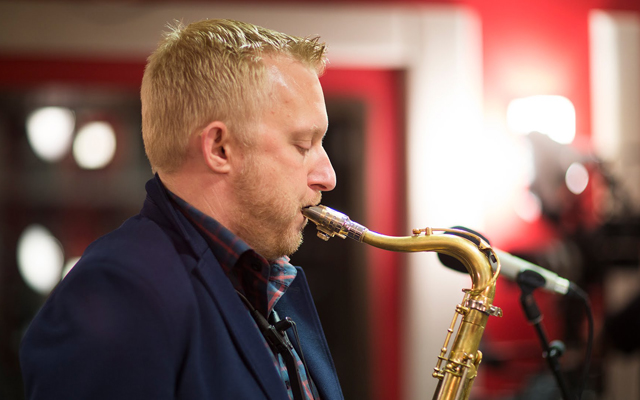 Cory Weeds has always possessed an insatiable curiosity for exploring the feeling of Jazz through his adventures on the alto as well as the tenor saxophone. On It’s East to Remember, his eleventh disc as leader Weeds serves up an eclectic menu of pieces – some standards, a piece by Kenny Drew, Luis Giraldo and two others by the late Ross Taggart, together with one each by this ineffable guest: pianist David Hazeltine and one by Weeds to close out the set. Each is a beautifully-crafted ‘short story’ in song, shaped by a charismatic musical voice – Cory Weeds – playing at a very high level with a high-flying group that also includes the extrovert New York trumpeter Joe Magnarelli, bassist Paul Gill and drummer Jason Tiemann. But principally, the music reveals Cory Weeds to be an artist of commanding and poetic personality. 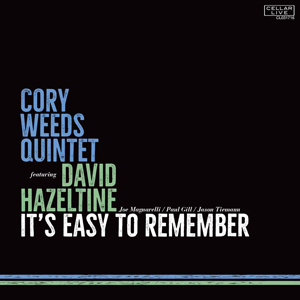 Weeds may seem at odds with most young Canadian musicians; indeed with most musicians anywhere in North America who appear to favour free improvisations with abstract titles, which an industry in love with name-calling has entitled “avant-jazz”, whatever that means. The saxophonist continues to play no-nonsense, wickedly swinging music in the Jazz idiom. He reshapes standards diving headlong into them and turning the music inside out, playing each anew to appealing and colourful effect. There are no tricks, no tricky time signatures and absolutely no fanciful posturizing; just an earthy roaring saxophone dancing through the changes with a spectrum of thematic ideas, packing a rhythmic wallop. The ravishing aura that Cory Weeds gives this music is wonderfully complemented by Hazeltine’s piano, supplying evocative foundations – with flights into a melodic stratosphere, every now and then – Magnarelli’s liquid fire and the gleaming sonorities of Gill, shadowed by the rumbling gestures of Tiemann.

At every turn, the protagonists appear to take turns basking in the spotlight: tenor saxophone teaming up with trumpet as they jitterbug and race in and out of waltztime through “Emily” for instance. The tenor saxophonist himself opens his shoulders in dramatic fashion with deeply felt touches of the blues on Kenny Drew’s “With Prestige”. Magnarelli is never very far from the action and neither is David Hazeltine, who seems to delight in prancing across the keyboard while Gill proves his virtuosity with a marvellously played arco solo reminiscent of something Milt Hinton often did – minus the mumbling, of course. Ross Taggart’s two compositions “Expose” and “Kelp” are radiant in themselves, have heart-grabbing melodies and are played with full-hearted affection, golden-toned eloquence by Cory Weeds. “Smoke Gets Into Your Eyes” is absorbing, and its cheeky line connecting the choruses makes it a delight to listen to – not simply because of the soli by Weeds, Magnarelli and Hazeltine.

The saxophonist Cory Weeds and his superb cohort invest these charts with plenty of vinegar and honey and they’re equally compelling in the swinging world of their Jazz idiom. Each of the musicians is vibrantly alert to mood and detail all the while feeding on the enterprising activity of Paul Gill’s bass and Jason Tiemann’s drums, both of whom play with gorgeous inflections and extended techniques. The recording was made at Spike Wilner’s Small’s Jazz Club in Greenwich Village. Weeds, who is also a “Jazz” Tour Guide, made an enterprising trip to New York City with a group of hard-nosed Canadian Jazz fans and invited them to sit in on this performance whereupon the recording was made amid the noise of The Village. A capital idea for the making of some truly evocative music.

Track List: With Prestige; Emily; Smoke Gets In Your Eyes; Expose; Candy Man; It’s Easy To Remember; Bossa For All; Kelp; The Mabe.