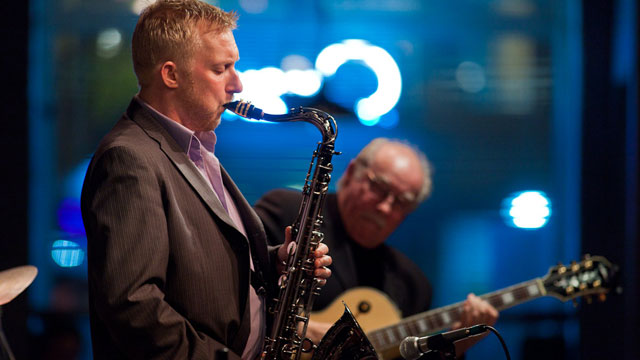 Of all the extraordinary things that Cory Weeds is capable of doing—and has done—the things he does with a saxophone are certainly the most amazing. Mr. Weeds has a deeply expressive tone. He is right “in the tradition”. He is a gifted storyteller; a griot that brings to life the twists and turns of this glorious maze with rapturous delight. Cory Weeds is also an outstandingly enterprising artist at a time when many leading saxophonists are content to stick with the familiar. What better manner in which to underscore this aspect of his musical personality than on Condition Blue and with the repertoire of Jackie McLean, who, in many ways, is to the alto saxophone what Herbie Nichols is to the piano. Of course all of this would be beside the point if Cory Woods didn’t produce the goods. It’s an overused word, but he is inimitable. 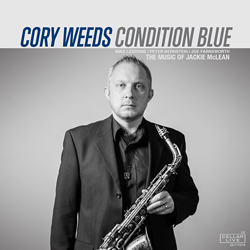 His Jackie Mac repertoire has no time for the notion of a Romantic melodic line being kept in check by anyone in his ensemble. Fortunately, in this case it would suggest that every one of the sidemen come from “the same place” as Mr. Weeds does. Their own performances leave no doubt as to their intentions as well. Although there is nothing predictable whatsoever about the manner in which Cory Weeds plays, he shows his hand in some of the zippier tracks. He begins in some of these, unhurriedly, as if the music were gently rousing itself to life. No sooner do you catch on, he takes off as if en route to the moon. But whereas in less imaginative hands could seem mannered or overly drawn out, here its mesmerising. Listen to “Slumber”, for instance, or to “My Old Flame”. Both these tracks have soli featuring fabulous upwardly curling arpeggios of rare poignancy. Notes glisten. There is a delightfully shifting pulse that drives the rhythm that has a real urgency, albeit an unconventional one. He ends both charts as he began—with a tempo that has gravitas (not to be confused with heaviness), the effect is gigantic, magisterial.

Most treasurable of course is his Jackie Mac repertoire. You have to take this on its own terms, though. What he does with the slow movements of some of the pieces gives it a kind of operatic reach and breadth, though he never does lapse into histrionics. And in the ends of the pieces he brings out the main theme’s stuttering quality superbly, lending the music not just a mercurial quality but a dramatic one too. His delight in some of the chewy harmonies—especially in “Jacknife”—is palpable, his phrasing iridescent in its range. This is the 100th record for Cory Weeds’ iconic Cellar Live label. Lest this fact go unnoticed, it bears mention that milestones like this add credence to the idea that Mr. Weeds has been forged from the same beaten brass of his as his saxophone. More people are catching on to this and respect for Cory Weeds is growing, especially in Canada where hard work often goes unnoticed. And that’s a good sign.

A tenor saxophonist with an expressive sound rooted in Jazz tradition, a label owner tirelessly documenting unsung Jazz heroes, one of Canada’s most important Jazz impresarios, the hardest-working man in Jazz business – Cory Weeds is all of these things, and much more. Weeds may be best known as the founder and owner of Cory Weeds’ Cellar Jazz Club in Vancouver, which he successfully ran for more than 13 years. Weeds built the Cellar to become one of North America’s best Jazz clubs, where masters such as George Coleman, Jeff Hamilton, Louis Hayes, David “Fathead” Newman, Dr. Lonnie Smith, and the finest Jazz musicians from Vancouver and across Canada performed before it closed in February 2014. Read more…