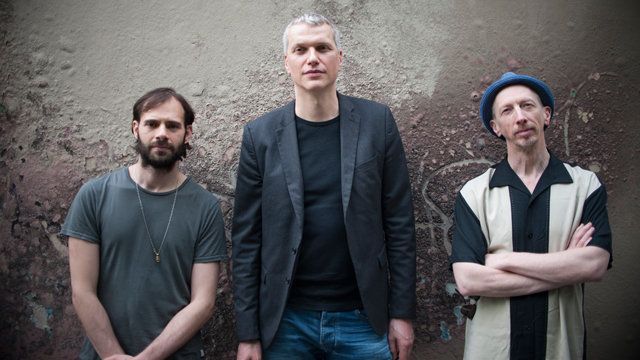 Two aspects of this disc are immediately striking: The brevity of its title and its principle protagonist, Jozef Dumoulin’s use of electronics. One-word titles, especially abstract ones can leave you wondering about what has been left unsaid and that’s not always a good thing. Or they can be suggestive and cut to the quick at the same time. Trust does both. It is highly suggestive and it is like a rapier. This is very helpful in “getting into” the music, which draws you in as if it is a mysterious and irresistible vortex. And this is where Jozef Dumoulin’s use of electronics comes in. In his use of the interminable sustain of the Rhodes and his quite clever approach to electronics he has certainly broadened the scope of the keyboards in music. Creating deeply beguiling atmospherics Mr. Dumoulin draws you into his world as if it were manipulated by a powerful magnet. If I am making all of this music sound metallic, perish the thought. Mr. Dumoulin has come together with two musicians who seem are on the same musical page as the keyboardist and there is a warmth in this music that is striking. In fact it is almost as if this were caused by a sort of musical breath; an inhalation and exhalation that is suggested by the spacey lines from Ellery Eskelin, enhanced by the keyboards of Jozef Dumoulin. 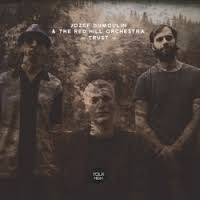 So what is Trust all about. The experience of the verb in the context of the music suggests making a leap of faith. You are springing forth off a death-defying precipice with absolutely no net to catch you as you fall. You fall, of course into a world that appears to be fluid and you would fall into a great depth were it not for the music that breaks your fall seemingly at every turn; sinuous arms embracing your mind as you are drawn into a tumble> And in the act of such gymnastics you become possessed of something absolutely absorbing. I am reminded of the intermingling of metaphysical poetry and music. It is as if the verse of John Donne and keyboard callisthenics of Jozef Dumoulin, and the airy tenor saxophone of Ellery Eskelin were locked in an interminable dance on the thin edge of a knife hanging out on the edge of a precipice. The only thing breaking your fall is the constant pulse of Dan Weiss’ drum’. This is a most alluring trio. Their music becomes ever more attractive as you are lured surreptitiously into their world, seduced as it were, by the music that hums in your inner ear drawing you ever inward into the interior landscape of the music.

The mystery deepens when titles of sequences such as “M”, “Inner White”, “Lord Blue Throat”, and “All The Dragons In Our Lives” follow, one after the other. If you wonder whether this is a hallucinogenic experience you would probably not be further from the truth. However, something is anchoring you to the ground and you would not be remiss if you thought magnetic anchor were coming from ever-present bass pedals from Jozef Dumoulin’s keyboards. I am reminded of the music of Jóhann Jóhannsson, whose ineffable music has the same effect on the heart and mind of those entranced by it. As with Jóhann Jóhannsson, so also with Jozef Dumoulin… The music is the mystery and it that mystery that deepens the more you listen.

Track List: Sea Green; Water Bears; M; Sleeping Warriors; Inner White; Lord Blue Throat; All the Dragons in Our Lives; Up and Down; Now That I have a Human Body; The Gate; Said a Blade of Grass; Sea Green

Born in 1975 in Ingelmunster, in the pretty deep Belgian countryside, from a very early age Jozef Dumoulin was totally attracted to music and sound, fooling around on the two pianos at home. Throughout his childhood and teenage years he attended classes in piano, organ, clavichord, euphonium, harmony and some drums. Around the age of 16 he discovered jazz, and began spending hours in the local library finding records and zapping the TV at night in the hope of bumping into some live jazz. After high school he studied psychology for two years but then decided to go to the Brussels Conservatory where he was tutored by Diederik Wissels and Nathalie Loriers. He also spent two years at the Musikhochschule of Cologne taking classes with John Taylor. Read more…