Home Music Christy Doran: In The Corner Of The Eye
If one were to lay odds which string instrument would figure with a non-string instrument, or instruments, odds would not favour the clarinet, saxophone and trombone. And yet the guitarist Christy Doran reveals such a spot-on sense of tuning and timbre that the shotgun marriage of musical families makes perfect, even inevitable sense. Even when Doran takes a break and doubles up on one track with the cello, he’s still inspired he colourfully differentiates detached and sustained articulation with animation and assertive, characterful wit and erudition. 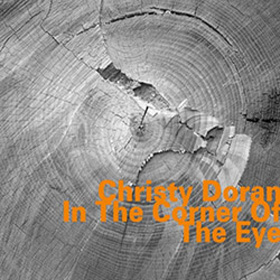 Much of the success is surely due to the featured soloists. On ‘Celtic Ballad’ tenor saxophonist Marty Ehrlich who often rests comfortably in the cracks between standard tonality, deftly rendering duotone improvisations as Doran playing creates further drama adding two-part multiphonics as the traditional Irish piece reaches its dramatic, keening dénouement. Trombonist Ray Anderson, clearly the inspiration and impetus for ‘The Warm Up’ offers a growling performance so inextricable from the piece’s musical conception that it’s hard to think of the music without his distinctive mannerisms. Rarely has a trombone been put to such vocal, smearing effect. Ehrlich returns as a clarinetist on ‘Beyond Words’ affects the listener’s very soul as Doran throws caution to the winds taking a careening journey through richly harmonic , tonal, but absorbingly unpredictable landscapes while the following movements fall as if in a trance under its dizzying fantasy.

On solo performances featuring Christy Doran on either electric or acoustic guitar with electronic delays as and when he feels the necessity of introducing t hem into the pieces the original compositions rear their poignant and jubilant heads, with subtle changes in harmonic and thematic persuasion to let us know that theatrical new perspectives are in motion. Consider ‘Switches, no cuts’ as an example of this kind of piece as it magically emerges from a thicket of wild, Jimi Hendrix-like sonorities. It is inevitable that Christy Doran would break up the disc with two pieces featuring another string instrument – Hank Roberts’ cello. The collaboration is endlessly fascinating; it sounds as if the music were being not just improvised but invented spontaneously. Urs Leimgruber, a soprano saxophonist who appears seemingly out of nowhere on ‘Spirale’ to remind us of why he is one of the most fascinating improvisers on his instrument in all of Europe.

The disc gives further credence as to how and why Christy Doran is so indispensible to the development of the instrument. His playing is gets more brilliant and gem-like as the progresses. Throughout his performance both in the duos and by himself, textures are so transparent that light shines through and timbres are so tangible that you can almost reach out and touch them.

Track List: Solomutation; The Warm Up; She Moved Through the Fair; Seven Shadows; Switches, no Cuts; Celtic Ballad; In the Corner of the Eye; Lou Yuri; Spirale (edited version).