In an almost supernatural way, the two discs of this boxed set by Ches Smith & We All Break seem to reinforce what the philosopher Ernest Haeckel stated as his [idea of] biogenetic law of 1866: “Ontogeny,” he said, “is the short and rapid recapitulation of phylogeny”. To explain: Mr Haeckel had thought that during the course of evolution the rate of development had accelerated, and consequently ancestral adult forms had been pushed back, or ‘telescoped’ into’ the juvenile stages of descendants. To extrapolate it to the music under review, it might suggest – nay, reaffirm – that the ability of Ches Smith, Matt Mitchell and others to be completely subsumed by vodou. 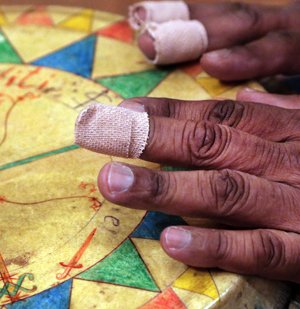 Moreover, to be completely one with its rhythmic heartbeat, to a degree of perfection [which speaks not only to our common ancestry]; almost as if somewhere in their artistic mitochondria is embedded the idea of the kind of spiritual communion that must surely have been at play. For surely it is this that had enabled the Americans to speak with one voice with the Haitian brothers and sisters through this music. It is as if at some point in the continuum of artistic evolution, the key to understanding of our common past must surely have been understood to a very high degree in order to be employed so viscerally as to communicate the vodou music in both these albums. Mr Smith’s booklet notes outline the historical timeline for this music – spread over almost six years. This gives it historical context.

However, it is the music itself that communicates the Boukman-like power as it unfolds, a phonetic fusion of African languages and French, a radical melodic, harmonic – and especially a rhythmic language where the drummers convey coded messages [between man and deities and back again], the kind that once gave psychological and spiritual sustenance to slaves, carried over today into the artistic community that is [the ensemble named] We All Break. The vocalastics emerge as if through the Haitian loas Sirene Dantor Rene and Fanfan Jean-Guy Rene while alto saxophonist Miguel Zenón does what he knows best – which is to “verbalise” this music with wraith-like caterwauling and the keening tones especially thorough the upper register of his alto instrument.

Meanwhile the drumming, [the dancing that we only get from the film version of this soundtrack], and the chanting propels us into di-optic world of the Haiti’s African Diaspora. It is full of light and shadow, of mysterious depths, expectations, doubts and joys, like the shattering shadows of an entrancing crepuscular vodou ceremony caught in moonlight and stretching the hopefulness of dawn. In sheer colour and subtle variety we traverse The Path of Seven Colors, guided by Ches Smith and We All Break, who expertly shepherd us through this scintillating programme.

In sheer power and mystical stature, and through “Ibo” “Woule Pou Mwen” and [especially “Lord of Healing”] Ches Smith inspires the group as listeners are purged by the trance through the “Path of Seven Colors”. This is an elegant, champagne disc – fizz and finesse.