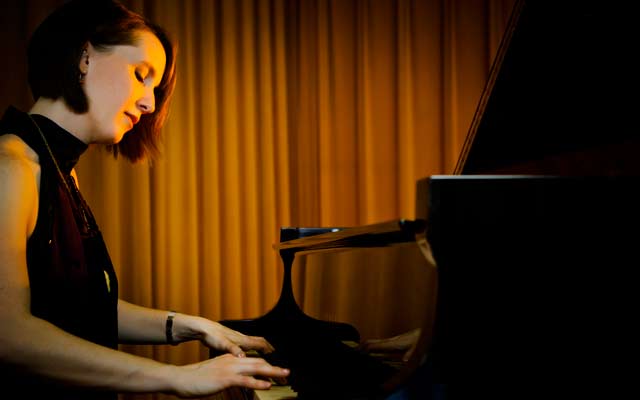 Words used to describe Catherine Marie Charlton’s performances sometimes emerge from the geological. ‘Mercurial’, a sometimes overused word, comes to mind, because it encapsulates so ideally the eloquence and unpredictability of her playing. ‘Volcanic’ is another. On this record, Maiden’s Voyage you can note her ability to give a piece a metaphorical kick in the backside if she catches the melody napping. More than once, here, however, I find her ability to make a performance sound as if forged in the white heat of inspiration, as if the music were being newly composed in the moment. This characteristic of her pianism is what makes Maiden’s Voyage such a breath of fresh air, audible in every note she plays. 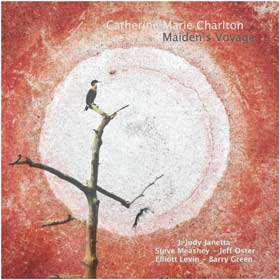 Still, when you turn over the cover of the CD, it might strike you as curious, if for a moment, that she chooses to mix the kind of standards no one usually does – from Kosma and Ahbez with Ginistera and Satie and Piazzolla. All is forgotten and long forgiven by the time you get to her own repertoire – rhapsodic and quintessentially romantic. The dynamism, élan, spontaneity and communicative immediacy characterising her work is something of a revelation. Ms. Charlton’s superb balances and subtle rubato liberate “The Lonely Cobbler” from something that could easily retreat into a romantic mush. Her original compositions’ appeal also stems in part from the variety of texture and style achieved by interspersing tone poems with narratives and musical equivalents of ‘still life’ portraits.

For an encore, gives us a beautiful solo rendition of “Autumn Leaves”. The artistry of this version will linger long in the ear and in the mind. It is a work of mesmerising beauty through slowly ascending and descending motifs and layered lines wedded to the composer’s text. A similar ruminative quality, with added rapture in Catherine Charlton’s originals tells me that among others Ms. Charlton might also love Liszt’s settings of his Ave Maria and Un Sospiro . I hear the latter in some of this work for the lilting and perpetuating urgency that ensues.

This is a remarkable record. Each score contains richly expressive material that tests the concentration of the performer. As led by meticulous attention to rhythm, balance and harmonic implications, Catherine Marie Charlton produces performances that are fresh, articulate and extremely poised. Each is a marvel of liquid flow amid vast reservoirs of sound, well recorded by Eric Troyer and mastered by Phil Nicolo. If only more recordings were produced with such meticulous care for production values.

Track List: Autumn Leaves; Nature Boy; Adios Nonino; Beneath the Dream; Sepia Moon; Dance of the Graceful Maiden; Gnossienne No. 4; Birds Flower; The Lonely Cobbler; Light Focus; Which you Which World; All That I Feel; Autumn Leaves (solo piano version).

At Catherine Marie Charlton’s first solo piano concert at the age of 18, a woman in the audience was so moved that she sent flowers with a note that read “Only once before in my life has another pianist brought tears to my eyes. You play with both strength and tenderness- how beautiful.” The letter now hangs framed in Charlton’s studio. Catherine Marie says that “Ever since that day, I have striven to express my passion through the piano, to recreate emotions through sound, and to touch listeners’ hearts with my music.” Read more…