I never knew what to expect from this CD by an artist I barely knew. A disc of many parts, perhaps? In fact it is more of a continuous journey – and a most rewarding, artfully conceived one it is too. Troy Roberts came to prominence, we are told, from the remote city of Perth, Australia. Some journey this! The geography of a Jazz artist is clearly defined, you would think. African-American. And, to all intents and purposes this is true. To have run the gauntlet of the blues, lived it, so to speak, is the de rigeur baptism of fire. But Troy Roberts also inherited the mould and he clearly has an innate affinity for not just the idiom and the rhythm but also the emotion. 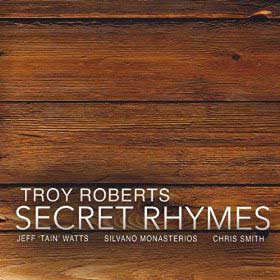 This record comprises works almost all of which have been composed by Troy Roberts; probably recent too. I love the way he plays them (and the works composed by Victor Young, Freddy Hubbard and Sergei Prokofiev too). I love his crisp articulation and forthright bustle; the arresting, impetuous opening to “Stella by Starlight” and the wonderful jeu perlé in its final page. Mr. Roberts has little inclination to bathe the passagework in an impressionistic haze, as many players are wont to do today. His compositions are not those of tone poems, choosing to emphasise the virtuosity of the writing and reminding us how much he has learned from the modern masters.

Here his saxophone becomes a painter evoking places and events and Mr. Roberts reacts accordingly with playing of beguiling, warm sensuality, preferable to my ears to the chilly objectivity of other saxophonists of his generation. The blazing end of “Secret Rhymes”, for instance, leads us, after a pause, quietly, naturally into the parallel sound world of Sonny Rollins. But Troy Roberts has an edge over the Big Tenor, as much for his fierce emotional engagement with the music as for superior sound quality. Elsewhere Troy Roberts attacks the music yet further afield he is gentle, almost surreptitiously so. I like also the manner in which he has transcribed Prokofiev’s concerto for the tenor saxophone, which he dispatches with miraculous evenness and fluency. And Freddy Hubbard’s classic is particularly evocative.

So full marks to Inner Circle Music for backing its young star and fingers crossed that his performance may provide an accessible and rewarding entrance point to those wanting to investigate his music further. I would be remiss if I did not mention the rest of the quartet – sensational to a man. And that’s what makes this a memorable recording. The whole, after all, is always greater than the sum of its parts.