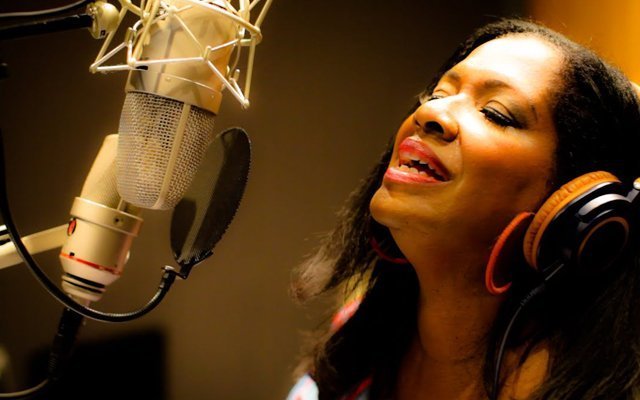 Carolyn Fitzhugh had already established that she was an artist of the first order when she released her first album, Simply Amazing. But with the release of Living in Peace she takes her somewhat unique artistry to a whole new level. Having Mark Ruffin in the producer’s chair has helped as has a remarkable band led by pianist and arranger Amina Figarova. But it is Miss Fitzhugh’s smoky, soulful voice that creates the magical aura around the repertoire that she tackles on the disc.

While taking some liberties with pitch with what appears at first to be intervallic imprecision, Miss Fitzhugh always lands the phrase and line just where it should be by sliding gently into what seems like the place to be melodically speaking at the opportune moment in time. And while one might feel one’s heart skipping a beat at times, like all vocalists who worship at the altar of originality, 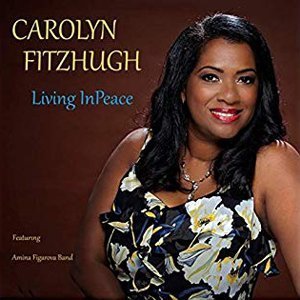 Miss Fitzhugh seems to emulate same the brazen creativity that characterizes the vocalastics of her great ancestors such as Abbey Lincoln, Shirley Horn, Betty Carter and even Sheila Jordan.

Songs seem to speak in a very special way to Miss Fitzhugh as well and there is plenty of evidence of that on Living in Peace. She makes the diabolical changes of Gil Scott-Heron’s “Combinations” all her own where her musicianship is fierce as she digs into the expression of each word; something she does likewise with James Taylor’s “Secret O’ Life”. She swings with pile-driving precision on “Yes I Know When I’ve Had It”. And what makes her ballads extra special is the ceaseless variety that she brings to soft dynamics which, in turn, gives every phrase special grace just like in “Living in Peace”.

The full impact of this aspect of her work may be listened to on “I’m Not Alone” – a song in which she shares a breathtaking duet with Freddie Cole – and “Intimate Acquaintances”, another vocal treat, this time with Nanny Assis. Miss Fitzhugh’s own writing is quite unique in its own way. She does not rely on conventional rhymes, preferring to tell jazzy stories which unfold much like the great improvising soli of great jazzmen. As a result you will find yourself entranced not only by the music, but also the stories that Miss Fitzhugh unravels for you.

The superb band is also in lock-step with Miss Fitzhugh and performances by Rez Abbasi, Wayne Escoffrey and Alex Norris are especially alluring. Besides, the presence and role of Amina Figarova is a masterstroke that merits special mention. The pianist’s performance is restrained albeit with several moments where she will allow her virtuosity to dart out of the keyboard and engage the vocalist, or some other member of the band. But it is Miss Figarova’s elegant arrangements that catch the mind’s eye and seem like a perfect fit for the vision and producer Mark Ruffin and the artistry of the recording’s main star: Miss Fitzhugh.