There are few takers in the demanding and diabolically complex world of big bands than there used to be and still fewer artists who have made an impression and sustained it. Sadly there would be almost no women albeit not for lack of the gifts required for writing and arranging the big band chart, as well as conducting and managing a large ensemble; no one, that is, if not for Maria Schneider. If of course one forgot to add Lisa Maxwell to that list then one can do it now. 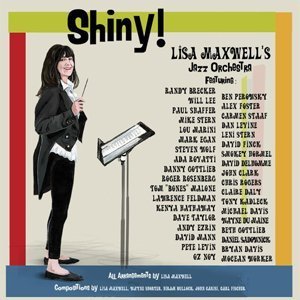 While no one was paying attention to the big bad world of the music business, Miss Maxwell was quietly writing and arranging charts for – among others – Warner Bros., Spinal Tap and Guns ‘n’ Roses. Now she steps out and into the spotlight with this magnificent big band recording Shiny!, which pays homage to a beloved member of The Blood, Sweat & Tears, and many a big band: Lew Soloff. Not surprisingly Miss Maxwell’s band features some of the most highly-regarded studio musicians headlined by Randy Brecker, Lou Marini, Tom “Bones” Malone, Dave Taylor, Roger Rosenberg, Alex Foster, John Clark, Claire Daly and David Finck. She also showcases the brilliant artistry of Mike and Leni Stern, Carmen Staaf, Paul Shaffer, Mark Egan and Danny Gottlieb, Oz Noy and the inimitable Kenya Hathaway.

Featuring beautifully crafted compositions and arrangements of beguiling variety and sensuousness, in every lovingly caressed phrase of Shiny! Miss Maxwell’s love for and mastery of the big band format quite literally shines ever so brightly. Her judiciously chosen repertoire also features arrangements of music by Wayne Shorter, Hiram Bullock, John Carisi, Carl Fischer and Frankie Laine. Listening to the way in which Miss Maxwell coaxes the musicians to seductively bend and shape notes and phrases in her opening show-stopper, “Shiny!” and how she sculpts long and sustained inventions in such music as “Beauty and the Beast” it’s clear that there’s not a semi-quaver that hasn’t been fastidiously considered.

This repertoire that is played under her own baton offers Miss Maxwell a wider and more diverse expressive canvas from one featuring the glorious bleating of Dave Taylor’s bass trombone and the expressive pianism of Carmen Staaf to the roaring tenor of Lou Marini and the pliant lines of Leni Stern’s guitar. As the music progresses from the first chart onwards, Miss Maxwell introduces us to complex series of melodic lines and harmonic embellishments that range from shyly blushing to fully blooming ones. All of this is balanced by brisk and rumbustious tempi that drive the bassists’ and drummers’ momentous wall of sound upon which brass and woodwinds magically glimmer, exuding the kind of swagger that puts an unique mark on Miss Maxwell’s writing.

All of this crests momentously, half-way through the recording with a breathtaking version of “We’ll be Together Again” by the almost majestically soulful vocals of Kenya Hathaway whose faintly smoky, shadow-and-light tone seems perfect for the song’s storyline. The song gets a surprise makeover with the addition of Andy Ezrin’s moody harmonies and a beautifully wailing solo from Lou Marini which soars above the ensemble, all of which is encapsulated in Miss Maxwell’s penchant for lyricism and beauty. Moreover the fluid pulse of the music – overall – driven by Miss Maxwell’s musical direction draws brilliant playing from the orchestra so that written and improvised passages each become a tour de force of mercurial delicacy (plenty of horn mischief too) while the music whoops and ;blazes as it should.