Home Music B’s Bees: Kanata
How does an artist – especially one living in an increasingly capitalistic, neo-liberal society – celebrate the seemingly old-fashioned but glaringly relevant, Republican Spirit first expressed by Maximilien Robespierre, then adopted by The Republic of Haiti; a modicum of which is still practiced in France, the Scandinavian countries and Canada? Well if you’re Canadian and if you’re Brandon Goodwin and B’s Bees then it’s obvious. You release Kanata an album that puts the old adage into a modern context, built around “The Kanata Suite”. But more importantly, you swathe the music – including the four other songs that are not part of the suite – in diaphanous and poignant neo-Romantic imagery, replete with the idiom of “Jazz” that itself stands for freedom.

“Kanata” is the Iroquois word for “Village”. How appropriate to combine this in the new Canadian spirit that has adapted the term “it takes a village…” to welcome the tired, hungry, poor and desperate refugee? Mr. Goodwin has done extremely well to fuse the socially aware side of his Canadian-ness with a very relevant (for Jazz) sensibility that emphasizes passion (or intense emotion) 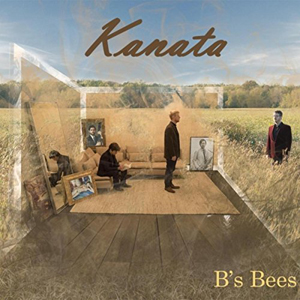 as an authentic source of aesthetic experience, placing in the four parts of “The Kanata Suite”, a grave stress on such emotions as apprehension, horror and terror, and awe. To that extent the inclusion of the Japanese saxophonist, Masashi Usui among this group of socially-aware young musicians from Canada and the US is also remarkable.

Mr. Goodwin’s suite combines the rumble of his drums and the growling gravitas of the Alec Safy’s contrabass with the harmonically-rich and introspective voices of Joe Ferracuti’s piano and Julien Sandiford’s guitar, as well as the hypnotic keening of Masashi Usui’ saxophone. The extraordinary musical aesthetic is sublimated in the nobility of the musical impromptu: Jazz. And suddenly the melodies of “Kanata”, “Syrian Lullaby” “Pipeline Blues” and “Liberté” become so much more than a work of music. They are also almost naked expressions of lofty ideals because they are articulated in gorgeously complex, yet accessible melodies awash with colour and tone calculated to glorify instrumental timbre and harmonic voicing to depict human emotion.

The social awareness espoused by these musicians in Kanata continues after the four movements of the suite; in songs such as “Refuge” and “Atomic Future”. But there is no attempt to inform the musicianship of this group with the creation of empty anthems. The four other compositions written (between them) by Mr. Ferracuti and Mr. Sandiford continue to meld melodicism with activist themes and even when this is more subtly expressed as in “Nothing Yet” and “For or Against” one is left in no doubt that here is a group of musicians who are likely to stay relevant for a long time to come as long as they stay true to their ideals both as musicians and as human beings, no matter how lofty and hard these ideals might be.