Billy Test could well be called a prince among pianists, a hyperbolic claim, some might argue, for someone so young. Yet his galvanic performances with the WDR Big Band and a recent recording he made with the incomparable Dave Liebman suggest otherwise. Certainly it appears that this exquisite debut recording as leader, Coming Down Roses shows him to be a musician whose time has come. He is brimful of musical ideas that seem to ripple through his very body and out his fingers that don’t play, but caress the keys of the piano, which is very much at his command. 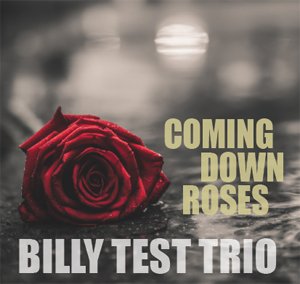 Melodicism seems as natural as breathing to Mr Test and even when he doesn’t do what you’d expect [which is frequently!] he is rarely less than convincing. In that respect there are parallels with Keith Jarrett, though their styles couldn’t be more different. What is quite amazing [although by now, nothing should come as a surprise from Mr Test] is that – apart from two songs, everything you will hear here comes from his mighty pen. His writing is superb, evidence of a fertile mind steeped in the songful tradition of American Standards, which is not to say that there is anything “mouldy-fig” about his work. On the contrary, his ideas and conceptions are as utterly refreshing as his pianism, but he belongs – without a doubt – to the great tradition of virtuoso pianists in Jazz who have gone before him.

Mr Test’s approach to the repertoire on this disc is sensitive and understated [he does create some combustion on his song “Hardly”, which sets the whole trio on fire]. Yet his prevailing lyricism is especially appealing on “All of You” and “Coming Down Roses” [the song]. His subtleties of touch and rhythm yield unusual and persuasive insights on “Spinning”. Magic moments and the heroic character of his work abound throughout the repertoire on this recording. There are also surges of energetic expression and a visionary scope on several songs; case in point “Empty Spaces”.

Both Evan Gregor and Ian Froman are also brilliant throughout. This is, however, Billy Test’s time to shine in the spotlight and judging for this mesmerising performance, one senses that that spotlight is unlikely to be dimmed in the near – or far – future.