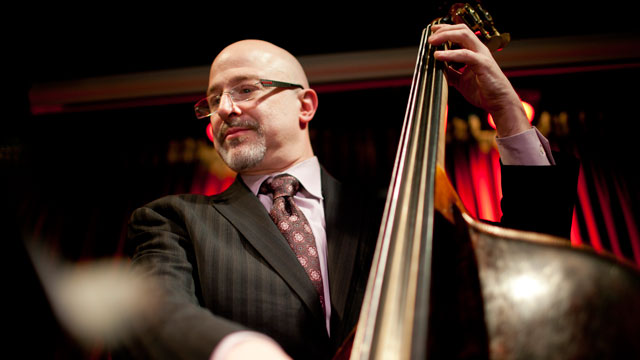 Sometimes the quiet ingenuity of a musician can make the most noise. This is certainly the case with the composer and bassist, Ben Wolfe. And specifically the bassist’s performance on The Whisperer is the epitomé of that quality, and because of that, one that demonstrates outstanding talent, musicianship and that ethereal thing called personality. It is true that all of this stands up to closer scrutiny on this rather memorable record. The bassist impresses also for his supple technique, effortless contrapuntal acuity, singing tone, tightly knit tempo relationships and well-considered embellishments. The lyrical minor-key variations stand out for Mr. Wolfe’s subtle and discreetly expressive rubatos. He imbues brisker movements with unusual and persuasive voicings and together with saxophonist Stacy Dillard and pianist Orrin Evans brings a miniature chamber-like integrity to the sweeping, waltz tempo pieces always keeping the melodic notes to the fore. At time Mr. Wolfe employs his unbridled technique to slightly slow down pieces as a variation unfolds. The then dallying notes make for an intuitive distinction that is rare among younger bassists today. 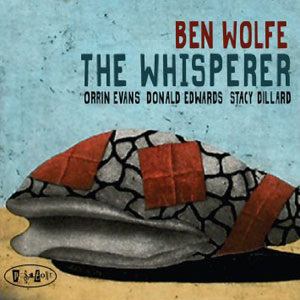 To me the interminable and elegiac ballad, “Love is Near” stands out as an exemplary piece of work. The pace is superbly controlled and organised. The warmth of the bass and the broad glissandos of the saxophone as well as the statuesque beauty of Orrin Evans’ interjections make the beauty of this music almost unbearable to bear. Some degree of musical density and feeling has much to do this as well as the outer sections that are appropriately light and soaring. And then there is a piece like “S.T.F.U” with a full complement of the quintet where the bassist all on his own is responsible for the impressive sustaining power of the rhythmic intensity; something that allows the soprano saxophone to wail with abandon, aided and abetted with the keening trumpet of Josh Evans. Here too drummer Donald Edwards is heard to the fullest extent of his being a rhythmic colourist, given ample space to paint his colours by the walking bass of Mr. Wolfe.

It is easy to hear why the extrovert temperament and big technique of Ben Wolfe has landed him is a premier position as a bassist. His music races from the starting gate frequently enough to wow the ears and quicken the blood. And even when he toys with you playing slower, more sensuous opening bars, you still get a measure of the robust nature of his finger-work and the manner in which he plucks sinuous triads shaking two-fisted chords by the scruff, toying with opening measures and making more melodic sense than usual over the blustery rattle and hum of Donald Edwards’ percussion. Then Mr. Wolfe’s sublime talent can be seen in all its glory as he shades the music with interminable lines of his own that rumble out of his bass violin with maximum variety and beauty. Then you are forced to stop in wonder as Ben Wolfe displays his musicianship in all its glory, which is made more palpable by the instrumental prowess of the rest of the ensemble as they all to a man fly in the face of convention, evoking the beauty of the music’s dynamism and colour.

Track List: Heroist; Hat In Hand; Community; Love Is Near; S.T.F.U.; Camelot’s Lean; Chronos; All The Things You Are; The Whisperer; Becoming Brothers; The Balcony; If Only

Listeners everywhere are encouraged expand their horizons and open their ears to “The Whisperer, as bandleader bassist Ben Wolfe bravely embarks on an ambitious course with his first record for Posi-Tone. This quartet date features front line performances by saxophonist Stacy Dillard and pianist Orrin Evans moving freely over the solid harmonic foundation of bassist Wolfe and the explosive metrics of drummer Donald Edwards. Many jazz fans may already be familiar with much Wolfe’s earlier work, but now the time has come to go travel beyond the past and listen to “The Whisperer.” Ben Wolfe’s music will surely bring delight to the ears of serious listeners everywhere, as they navigate steadily away from the known and familiar to uncover a new sound in time and space.