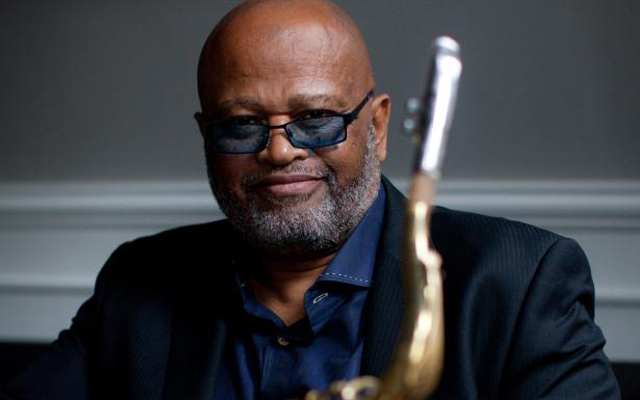 Few musicians look and sound as iconic on the saxophone as Azar Lawrence, an instrumentalist who has been credited with recalling the great spirit of John Coltrane, at least for two musicians who knew Mr Coltrane better, perhaps, than any musician – McCoy Tyner and Elvin Jones. However, being spoken of in the same breath as Saint Coltrane ought not to be mistaken for “sounding like”… One gets a sense that even as Mr Lawrence plays both tenor and soprano saxophone with a similar intensity, the restless nature of ‘Trane’s sound is replaced by an almost statuesque calm in Mr Lawrence’s playing so that even while exploring minor scales, Mr Lawrence seems to play from a place of almost Yogic mindfulness – a remarkable achievement considering he too seems to be reaching out for his personal musical Holy Grail when he plays those long cadenzas on this disc. 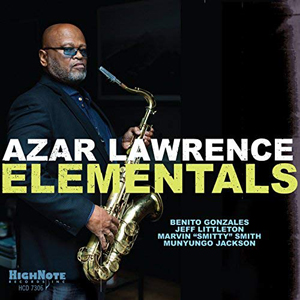 On Elementals Mr Lawrence shows that while there is a sort of quietude to his music it is also sinuous and powerful – and iconic bluesy saxophone sound. His is a “voice” informed by a seductive blend of warmth and brassiness deriving filling its conical metal body with lungsful of air before “singing” his way through a single moist reed, often with liquid glissandos. Often – as in “African Chant” – the saxophonist’s ethereal tone is showcased as the music unites African vocals and rhythmic chanting voices with the modal atmospherics of Benito Gonzales’ pianism. Elsewhere on “Brazilian Girls”, “Solar Winds” and “Kama Sutra” Mr Lawrence’s earthy exuberance is often tempered by a kind of contemplative sculpting of notes and phrases that certainly elevate the saxophone from its nightclub roots to the concert hall.

And the variety of stylishness of the rest of this enterprising Elementals programme certainly does justice to Mr Lawrence’s attempt to draw attention to the spirit-world of music. Each performance is also effortless, suggesting a deep connection with the spiritualistic as well as the aesthetic aspects of music – and that too on the part of all of the musicians who appear on this date. A certain urbanity and lyricism also informs the music, which is as seductive as it is persuasive and through it all we hear Mr Lawrence who provides an object lesson in the very essence of style with as the music is performed with buoyant, aristocratic grace and psychological ambiguity, with almost insolently effortless and debonair virtuosity and swagger from beginning to end.