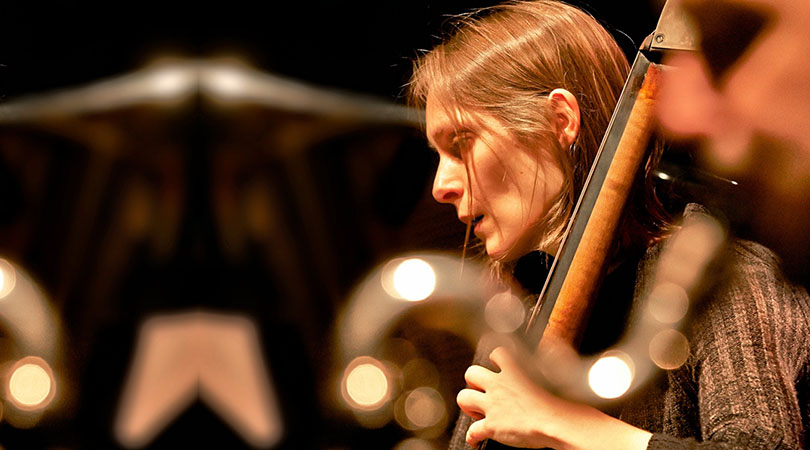 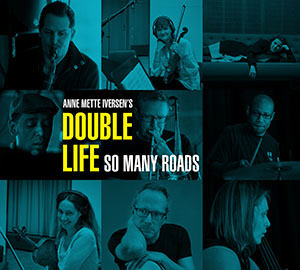 Anne Mette Iversen’s album, So Many Roads is a profoundly beautiful album. The album traverses through what is seemingly a dark and brooding musical topography before emerging into what seems like everlasting light. The journey may be simply entitled, but the musical odyssey that supersedes the simply journey is far from that. It is a complex and multifarious musical expedition that arises from the depths of the bass into an intellectually sophisticated flowering of several woodwinds and brass, as well the beautiful interpolation of a string quartet that tempers the augmented sound of brass and woodwinds; a sound that in its profundity adds a somewhat more cerebral quality to the excursions into which the musical aspects of the composition is melded. For this is not merely an intellectual pursuit. Ms. Iverson is first of all a musician who is steeped in her art and is made substantially of music. Moreover, having decided to move the bass into the spotlight she has decided to make also a polyrhythmic statement, in addition to a polyphonic one. In the extraordinary nature of the creativity, deeply rooted improvisatory musicality, European and Afro-American cultural topographies are melded, but more than anything else the composer and musician takes the music back to a time where all composed music was spruced up rich forays into improvisation, with breathtaking cadenzas.

Ms. Iversen’s music is written in the form of a suite and one that might easily construe to become her magnum opus. It is divided—the music suggests into four literary chapters—this division again is according to the stage of the musical journey and characterised almost exactly by the change in mood and emotion. Accordingly the music is guided by super dynamics on the part of the players, whether they be the trombonist, saxophonist or pianist—why, even the drummer. This part of the ensemble has been written for as though they were among the main protagonists in this dramatic musical invention. It is the trombone of Chris Dahlgren and the saxophones of John Ellis that form the lead voices of the dramatis personae. This literary angle of this musical expedition is almost like a Grecian drama, with its narrative running the gamut of feelings and emotions—perfectly depicted in the voicings of trombone and saxophones especially in “Chapter Two.” The earlier, “Chapter One” largely sets the scene and “Chapter Three” and “Chapter Four” delve into the psyche of the musician’s journey arriving at a sort of cerebral vivisection. It is from great depth and sometimes deep melancholia that emotions emerge and sketches are wrought in a manner that suggests that the musicians’ first etch introduces light; then shadow, before the lines in between; the lines played by the strings as well, introduces the wonderful colour; as well as the tones and textures that the composer had in mind.

This is a work of considerable achievement and the credit must, of course go to Anne Mette Iversen, whose vision and craftsmanship made all of this possible. It also bodes well for Ms. Iversen as a composer and writer. But her abilities as a bassist must not be forgotten. Mr. Iversen is an astounding harmonist and a melodic bassist of the highest order. Consider her playing throughout, but especially in the opening and closing sections of this suite and especially her playing con arco and there is a measure of how exquisite a bassist Anne Mette Iversen truly is.

Danish bassist Anne Mette Iversen arrived in New York City in 1998, where she produced much of her contemporary work, using the organic staccato beats of her adopted city as inspiration.

The summer of 2012 she relocated to Berlin, which provides outlets for jazz musicians that New York City lacks. Ms. Iversen has five releases out as a band-leader, two of which are double albums. She has done several tours in Europe and the US, including performances at esteemed European jazz festivals. She leads her long running jazz quartet: ‘The Anne Mette Iversen Quartet’, the ‘Poetry of Earth’ group, and ‘Double Life’ – the collaboration with her jazz quartet and the 4Corners string quartet.

Ms. Iversen has worked extensively as sideman and performed with world class musicians in and out of New York City. She has curated and performed for the Royal Danish Embassy in Washington DC and for The Danish Consulate General in NYC. Ms. Iversen holds a Bachelor of Fine Arts in Jazz Performance from The New School, NYC, and is a former classical piano major at the Royal Conservatory of Music, Denmark. She is a current member of the musician’s organization, “Brooklyn Jazz Underground.” Ms. Iversen is considered an important voice as a composer, leading the way for modern, contemporary jazz composition. Ms. Iversen has scored music for 3 short-films. She composes both jazz and classical music.