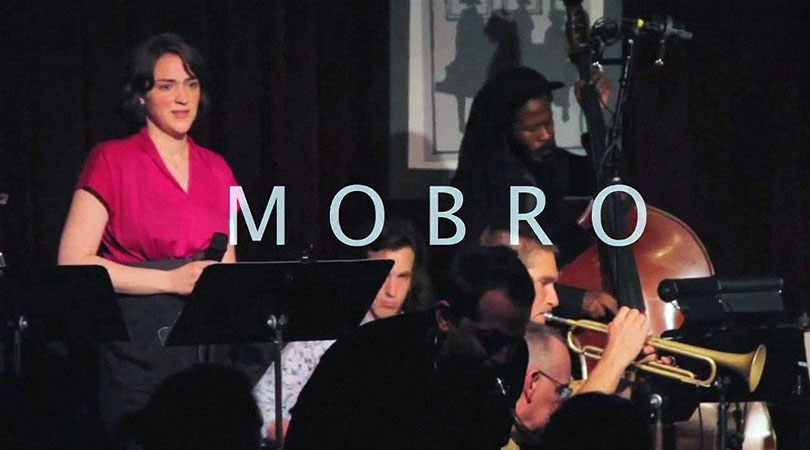 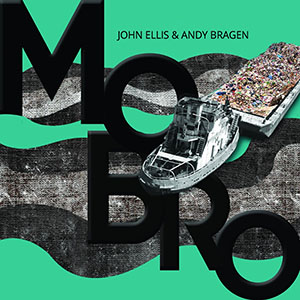 If MOBRO the beautiful album from John Ellis and Andy Bragen is an allegorical story based on the near-apocryphal voyage of the Mobro 4000, it is as likely to sound like life itself, or sailing along with the flotsam and jetsam of life and allowing the transformative effects of such a journey to influence the end of the journey. It bears mention that an artist must balance the abstract with the concrete in order to become accessible to the listener both in terms of the fable as well as the intended meaning of the actual event. In actual fact, the music in this recording is closer to the event—as the song-titles reflect—than might seem at first. The music is much more angular and oblique in its metaphor and idiom, even though the words often go towards making the incident come alive for those who remember the original voyage of the barge, or for those who research the fateful story. Mr. Ellis and Mr. Bragen have inventively captured the essence of that voyage without being too crass about its mission. Even more inventively they relate this experience to the way life hands out its blessings and its curses. The creativity begins with the selection of four voices used in together or separately to colour he lyrics from a gorgeous palette of colours.

Becca Stevens is the pristine voice, hers is the heraldic sound of life’s intent and all that is glorious and pure, and intended for the good; this may be gleaned from the accompanying lyrics. Hers is a life in the raw without any adornment or falsification. It is almost naked and pure and its beauty comes from the aria-like rendition of the lyrics assigned to her, to which, in a manner of speaking, she adds her own beautiful colouratura. The other female vocalist, Johnaye Kendrick fits more into the shape and substance of the soulful and gospel singing, hymn-like requirements of the lyric. Hers too is a beautiful voice which soars in quite a different manner to the abject beauty of Ms. Stevens’ voice. Ms. Kendrick’s is also a singular voice and to her belongs the sensuous beauty that goes more with the husky and gravelly beauty of Miles Griffith’s exquisite singing. His is the often the salutary voice and the voice that cries for the destruction of relationships as in “Storm”. As raw and mighty as his voice is Mr. Griffith is also the voice of authority and of reason, along with that of Sachal Vasandani, who is a good substitute for the wild ramblings of Mr. Griffith. It is notably the voices that create the magnificent vocal commentary for this musical sojourn.

But the music of the brass and woodwinds, guitars, bass and percussion must not be denied. It is important to note that the musicians accompanying the vocalists are as important to this libretto, written by Andy Bragen with music by the ineffable John Ellis, in terms of establishing motivic beauty as well as colour and a deeply textured exquisiteness even to those sections of the music that are not necessarily about the beautiful aspects of life. This instrumentation is a wonderful part of the journey and must also be considered a part of this masterfully written score. Four and a half stars out of five!

John Ellis is widely recognized as one of New York’s premiere tenor saxophone voices. A sideman to artists as diverse as bass icon John Patitucci, organ legend Dr. Lonnie Smith, and MacArthur Fellow Miguel Zenón, John has performed extensively around the world for the last 20 years.

More...
With more than 100 album credits as a sideman, John can be heard with artists as wide ranging as Charlie Hunter, Robert Glasper, Darcy James Argue, Edward Simon, and Sting. John was the 2nd place winner of the prestigious Thelonious Monk Saxophone Competition in 2002, was the recipient of three composition grants through The Jazz Gallery for the creation of new work (“Dreamscapes”, “The Ice Siren”, and “MOBRO”) and was selected as the 2014 Make Jazz Fellow by the 18th Street Arts Center in Santa Monica. John has released seven albums as a leader, two of those featuring his wildly popular New Orleans-centered band Double-Wide, which has toured extensively and was featured on the Main Stage of the 2012 Newport Jazz Festival. “MOBRO”, his most recent long form narrative collaboration with playwright Andy Bragen, will be released on Parade Light Records on May 13.

Andy Bragen, a lifelong resident of Manhattan’s Lower East Side, was a 2009-2010 Workspace Resident with the Lower Manhattan Cultural Council.

More...
Other honors include the Clubbed Thumb Biennial Commission, a Tennessee Williams Fellowship from Sewanee, and a Jerome Fellowship. His plays and translations have been produced and/or presented at numerous theatres across the country, including The Guthrie, The Goodman, PS122, The Playwrights Center, Queens Theatre in the Park, EST, Brown/Trinity Playwrights Rep, Studio Roanoke, The University of Rochester, and Soho Rep. Andy collaborates frequently with the jazz saxophonist John Ellis. Their most recent piece, Mobro, a chamber opera for nine musicians and five singers was commissioned by and performed at New York’s Jazz Gallery in 2011, and featured on WNYC radio’s Soundcheck.