To the extent that musical notation is a topographical map that provides points of orientation that allow players to walk the interpretative walk, their idea of how a piece might journey through time and space – corresponding – hopefully with the composer’s own, the music of Perpetual Delirium is an outstanding example of just such an expedition. And just when you think that this is all that Andreas Schaerer and The Arte Quartett, with Wolfgang Zwiauer do here, the musicians throw up precisely the opposite interpretative approach. Andreas Schaerer’s compositions specify notes and chords for the saxophones and bass and allies them to a time frame in which they can be placed, but as we hear and see in this 2-disc set, the actual sounds to be used and their ultimate duration are left to the performer’s discretion.

This can bring its own set of problems, like when classical persuasion embraces the swing of jazz in a contemporary setting. There is little more toe-curling than the classical musician who fancies himself as a jazzer but simply cannot swing, but this is simply not the case here. With an almost constant poking and prodding by the voice artist, Andreas Schaerer, The Arte Quartett and guest bassist Wolfgang Zwiauer are up to the task and more. The musicians have got the technique, taste and temperament in spades, while cleverly – since most of their choices are arrangements by Mr. Schaerer – retaining not simply classical poise, but the swing of delight as well. 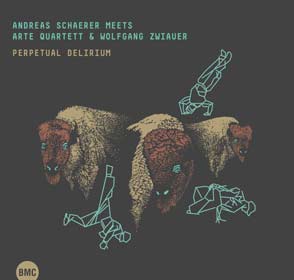 There is another small situation for the listener to come to terms with. Andreas Schaerer, being something of the leading light in this mix, threatens at times to throw a spanner in the works. His is an art that simply cannot be separated by those that founded not the arias from which he draws inspiration from but the vocalese, scatting that recall not just Dieter Fischer-Dieskau (for example) but also Eddie Jefferson, Al Jarreau and Bobby McFerrin. However, I am soundly in Andreas Schaerer’s corner here. For although each of those musicians does what they do best, Mr. Schaerer seems to take from them what is best and make it his own.

Few performers of the European school of compositions show sounder judgement and greater acumen than the Swiss voice artist and this quartet of saxophonists joined here by an incredibly sympathetic bassist. The interweaving of texture and tone-colours is most unselfconscious and almost always sound dangerously seductive. But primarily there is Andreas Schaerer; always challenging the other performers to keep four/five separate strata evolving concurrently – no easy task for one man a Pandora’s box of vocalastics and a microphone. But from the first selection, “Grosser Bruder Von Q1” through “Perpetual Delirium” to “Vinsquo” Mr. Schaerer takes his time and from the margins of audibility, the first sounds you hear is his vocal gymnastics pounce upon the other musicians, firing them up to indulge in gymnastics of their own.

This is controlled anarchic harmony at its best – another way of describing the seemingly randomised layering that resulted as these pieces ran their course; but Mr. Schaerer’s and the other musicians’ sensitivity for shape-shifting sound around an emerging structure, their intuition for when new sounds should be triggered while others decay, demonstrates the responsibility that comes with open-form freedom. The volatility of this recording (and the recorded performance on DVD) may break – even shatter – the sanctuaries of silence, but the music always retains its sense of propriety soaring above glorious counterpoint and drawing a line from Bach to Bartok, via Ellington and Mingus, Coleman, Lacy and Braxton.

Composer and performer, Andreas Schaerer, was born in Switzerland in 1976. He spent his childhood in the Valais region of the Alps mingling with sheep, later moving to Bern and the picturesque region of the Emmental. He left to complete the acclaimed teacher-training course at Hofwil. Schaerer’s musical career began when he was young, using early tape decks to produce compositions such as, ’Duo for Sewing Machine and Harmonica’, before gaining his first stage experience as a teenage guitarist for the renowned punk band of the time, Hector Lives. Read more…

About The Arte Quartett

The Arte Quartett was founded in 1995 by the four saxophonists Beat Hofstetter, Sascha Armbruster, Andrea Formenti and Beat Kappeler. The musicians have a classical background yet they are stylistically open-minded, a fact that is shown by their intense cooperation with musicians and composers of various styles. The Arte Quartett is mainly committed to contemporary music and its various aspects. Read more…