The first thing to say about these performance by Becca Stevens on Perfect Animal is that it is consistently beautiful, alert to the implications of the word-setting, whether ecstatic or subdued, and instinctive in the use of vocal colour to summon up poetic images and emotions. Then there is the instrumental aspect of her music, and the rest of the band’s as well, which matches the vocalisations in the subtlety, characterisation and refined textures of the instruments creating evocative miniatures that span the varied spectrum of sensations, some firmly fixed, others more elusive but all conveyed throughout with fluency and underpinned with meaningful expression. There is no competition between them and you get the feeling that each one’s music belongs to the other and vice versa. 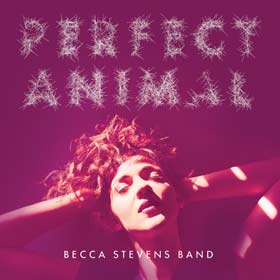 There is an exceptional affinity for the music here and it shines, thanks to Ms. Stevens, of course, but I should also stress, this is true for the of the band as well. But it is Becca Stevens who leads the charge – notably in “Imperfect Animals” – and it shines through every nuance here. And elsewhere, too the lightening changes in mood, the abrupt transformations from the boisterous to the intimate and, of course, the unsettling switching between the almost prayerful and playful are brought across with complete composure and what may come across as an awkward juxtaposition of unrelated ideas becomes a natural progression of ingenious musical invention – especially in “You Make Me Wanna” never blunting its highly distinctive edge. The music including that of other composers is always fresh and invigorating. Becca Stevens always makes it better, more refreshing for our ears.

Exquisitely turned phrases and superbly poised melodic lines, be they pseudo-chanting of the lonely soprano and the magically beguiling sense of rhythm or the vertiginous flights of Ms. Stevens, bring a sense of coherence to the programme. You have only to listen to Becca Stevens’ rendition of Stevie Winwood’s “Higher Love” to hear what I mean. Ms. Stevens is on absolutely top form throughout, switching fluidly between the highly-charged energy of the breathlessly galloping “Tillery”, with its subtle harmonic switches of ethereally floating quietude of “Be Still” with absolute assurance. The vocal harmonies are another reason why this album rockets to the top of the pile as far as vocal albums are concerned.

If a highlight has to be identified, for me it would be the sumptuously voluptuous account of “You Make Me Wanna”. Coupled with a beautifully atmospheric recording and the total absence of notes to disturb the intimate relationship between the vocalist, her songs and the listener, this is a one-disc compendium – albeit short – that no Becca Stevensohphile should be without. After all, such affinities between sound and word are excellently drawn to the surface on this excellent record.

“I wanted to use the word ‘animal’ in the album title, because writing and recording this set of songs was like taming something that had a life of its own,” Becca Stevens says of her revelatory new album Perfect Animal (April 2015). ”The title came from the track ‘Imperfect Animals’ which I wrote about the instinct to strive for perfection pulling against the understanding that such a condition is not humanly possible. That’s a big theme for me, and it’s something that I go through in my daily life, in my relationships, and every time I write a song.” … Read more…