Listeners who are already familiar with the cultivated musicality and fastidious musicianship of Acute Inflections – a voice and bass duo comprising Elasea Douglas and Sadiki Pierre – will find their admiration magnified exponentially at hearing the music on their album full of indigo blues and entitled Let Go.  There is something both seductive and ingenious about the manner in which high-sprung lustre of Miss Douglas’ voice dances and sensuously wraps itself around the growling pizzicato of Mr Pierre’s contrabass. So much so that suddenly seemingly innocuous lyrics in these songs take on an air of large-hearted humanness and sophistication. Cue the song We are the Champions if you would like to know what this sounds like. 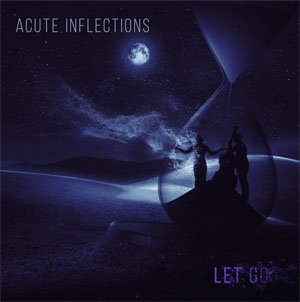 You will be immediately struck by the vigour and spiritedness of the contrabass in the hands of Mr Pierre. Here is a cultivated instrumentalist who sings with nerve endings of those fingers with which he attacks and/or caresses the strings with exceptional technical address, and the rhythm – and sense of time – is immaculate no matter what the tempo. You’ll hear both in A Change is Gonna Come – sung with a quintessential heartache by the inimitable Miss Douglas. Hers is such a soaring Blues interpretation, full of dallying articulation and phrasing, dripping with tremulous sadness that you will never be able to listen to another version of this song once you’ve heard this version.

The same may be said of almost all of the songs on this album. So intimately conjoined is Miss Douglas with these lyrics – as is Mr Pierre – that they don’t seem to sing and play this music, they seem to make love to it with smouldering passion as they traverse the nuances of narrative and emotions. There is a beauty and bloom that infuses even the most mournful of texts with a plethora of subtle hues and this makes the performances of both vocalist and bassist quite without peer.

Having established the magical nature of the human voice, it is only fitting that Miss Douglas sings so engagingly throughout this programme, which is aglow with the warmth of her soprano. The manner in which she holds onto the bell-like high notes highlighting the suspended inventions glorified by the perfect pitch of her musicality. For his part Mr Pierre’s playing steps up to this mark with an erudite rumble that counterbalances the fluttering blithe spirit of the vocalist.

And just when you thought you’d never hear anything but his pizzicato, the bassist introduces the song What a Wonderful World with a magical cadenza played con arco. The mystical stillness that follows that brief solo is broken when Miss Douglas enters the musical duet rocking the lyric before the bassist returns this time with a magical pizzicato break. The song closes with bassist following Miss Douglas as she gives wing to a lyric that gained unforgettable fame in the gravely majesty of an equally unforgettable performance by the great Louis Armstrong.

This is yet another album of the starkly brilliant duo Acute Inflections replete, once again, bristling with artistry of the highest order. From end to end this is music to absolutely die for…