Billy Drummond is photographed here by P. Korbut.The Cambridge Dictionary defines masterpiece or chef-d’oeuvre thusly: an artist or writer’s greatest piece of work. The dictionary cites works by Leonardo Da Vinci [The Last Supper] and Giovanni Boccaccio [The Decameron]. But in both English and French the dictionary doesn’t provide examples of masterpieces by musicians, although there are numerous ones through the continuum of music]. However, in keeping with the definition stamped in stone by the dictionary produced by the august academic institution we ought to consider Valse Sinistre by Billy Drummond & Freedom of Ideas a fine example by this modern musician. 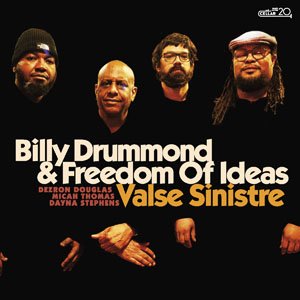 Mr Drummond is more of a percussion colourist than merely a drummer in the classical sense. But sadly no Black American since the legendary Warren “Baby” Dodds the legendary musician who turned modern drumming into percussion-colouring on a drum-set built for him by William Ludwig] was held in the same esteem as a timpanist in a symphony orchestra. This is despite the fact that many drummers from Baby Dodds to Mr Drummond have been cast in that mould. But that is quite another story…  Suffice it to say that with the repertoire on the album Valse Sinistre Mr Drummond has established himself as a percussion-colourist of authority and character.

You know this right from the opening bars of Jackie McLean’s Little Melonae, an up tempo piece with a Charles Mingus-like dissonant cadences and a shifting pulse rapid as a machine gun. And how does Mr Drummond respond to the writing? With an elemental tattoo on the skins of his snares and floor tom-toms, and delicate swishing strokes that produce a seductive hiss on the cymbals – all of which create so much melodic percussive colour on the humble drum-set. Mr Drummond’s playing is never innocuously monolithic while creating his rhythmic edifices for the melody- and harmony-playing musicians in the group.

He never allows music to evaporate into thin air either, displaying throughout a finely concentrated sense of music that achieves its vision and depth through his rhapsodic virtuosity. On the chart Never Ends, composed by the pianist Micah Thomas, the drummer invites both the pianist and saxophonist Dayna Stephens to invent florid whorls that elevate the ensemble’s harmonic activity to a proverbial fine art. Valse Sinistre by Carla Bley is turned into an expressionist visual masterpiece with Mr Drummond voicing his own formidably assured and trenchant voice, his fiercely energised performance on the propulsive tempo, keeping everything smartly on the move until the iconic music’s dénouement.

Mr Drummond plays ballads with heart-aching eloquence. Laura is one of these pieces on which he rivets your attention with every dallying melodic, harmonic and rhythmic variation. But lest it appear that this recording is all-Drummond and nothing else perish the thought; Dayna Stephens dazzles with his monumental virtuosity on both – soprano and tenor – saxophones. His phrasing and dynamics are extremely subtle and on Mr Drummond’s Changes for Trane & Monk he turns in a remarkably fine performance, his tonal colouring, flashes of bravura and imagination make for a memorable questing recital.

Mr Thomas delivers a whisper-sensitive solo on Frank Kimbrough’s Clara’s Room. Meanwhile just when you think Dezron Douglas is content to provide quietly towering, incisive support to Mr Drummond and the rest of the group with his dark rumbling notes, [which he is], the bassist steps out into the limelight from time to time to say his proverbially elegant piece. Even in the innocuous walking rhythm of Stanley Cowell’s Reconfirmed Mr Douglas growls- often with the menace of a big cat. He also shows a high degree of charm and affection when he moves to caress rhythmic figures throughout. He is always the perfect foil to Mr Drummond inhabiting the peaks and valleys of music that sends blood rushing to the listener’s head in moments of fast-paced action [as on Tony Williams’ Lawra], or effects sang-froid when the piece calls for an delicately artistic chill…

From end to end this is music to die for …