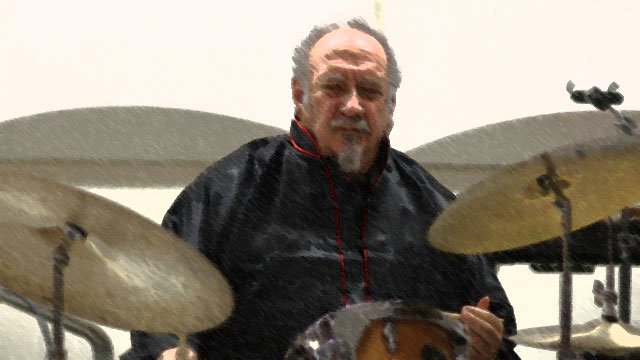 In one of the most poignant moments of this remarkable documentary its protagonist Abbey Rader, declares that “The spiritual realm…is really the governing body of everything.” This is something that the musician and drummer, martial artist and Buddhist, learned a long time ago when he was on an interminable journey through life, just as John Coltrane was. Mr. Rader also strove for the same things that John Coltrane did: Spontaneity in all things. Mr. Coltrane acknowledged that in A Love Supreme. Abbey Rader has been journeying thoughtfully through the sound worlds of the past, digging deep into his soul, experiencing his own and the artistry of great figures that went before him in a most visceral manner. It affected his music profoundly. We hear and see this throughout Get Free a short film by Jorge Rubiera. You know at once that the film is a truly outstanding audio-visual essay that looks into the life and legacy of an artist en route to legendary status for Mr. Rader.

Embracing Abbey Rader’s past can enrich the present. Not just his, but our own as well. It gives us a unique opportunity to view and hear about the central dictum of his life: Music is meditation. This is what drives him; enables him to align all ideas in the unity of music, meditation and martial arts. The film is superbly paced. Through the streets of New York rich in a somewhat forgotten history of jazz to the peaceful retreat in the woods outside the city where it is impossible not to meditate, we are privy to Mr. Rader’s extraordinary world. There is a mesmerising rhythm that unfolds drawing us in to what might only be described as the graceful unravelling of T’ai Chi. This gentle pulse informs the “supreme ultimate force” which, in turn, informs Abbey Rader’s music as well. We live through his music with a certain thrill. The mesmerising sound of the drums dances around the the tenor saxophone of John McMinn, the alto saxophone of Noah Brandmark and the bass of Kyle Motl, like ethereal molecules of DNA and sets the tone for the soundtrack of the film. You are, in fact, transported to a time when drums first spoke the language of life, love and music and it is this very hypnotic swaying pulse sets the tone for a future when Abbey Rader, sailing through the present, will finally find the appreciation that he so richly deserves.

In choosing the black and white medium for the narrative, Jorge Rubiera has delivered something of a home run. It speaks of a history of music and meditation that seems to come alive in the frames in the film. The cinematography is exquisite too. Visuals melt one into the other whether Abbey Rader is playing with his quartet or whether he is taking you on a tour of New York City and from there on to the meditation centre in the woods. Mr. Rubiera shows himself to be a filmmaker with a unique feeling for Mr. Rader’s drumming, his music and the rhythm of his life.