How beautiful is life? It’s the hardest thing for someone to consider while watching a sunset knowing, as the sun dips slowly beyond a blood-red sky, that it will be his last. But Roswell Hopkins Rudd is someone who loves life enormously and probably never thinks of that because he is too busy making not only his own life, but the lives of those around him so beautiful that perhaps he forgets to watch that proverbial sunset altogether. Which is what makes these words all the more poignant: “I never left,” he says, “And now I’m back…”

It’s hard to think of Roswell in the past tense because he is ever present. Musicians who love to wake up to what they do continue hear his voice and his laughter. They continue to see his face crack a sly smile through the perennial grey goatee. And those who listen to the wind in the trees are certain that they can hear that proverbial, lugubrious and incredible honk of his trombone. It’s like Bird… who lives in every alto saxophone, every time a questing phrase is played.

It’s like Monk who lives every time a boppish cluster chops up the keys. It’s like Herbie Nichols when an enlightened musician decodes the pianist’s whipping bass line melody… The same thing happens when you hear “Lullaby for Greg”… Roswell lives in the lilting warmth of the trombone as he makes it leap like a skittish bird then swoop like a swallow, putting his baby boy to bed. “And now I’m back,” he says. 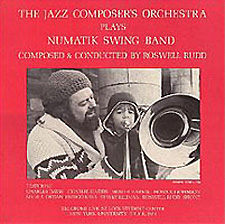 But it’s true: Roswell never left. Like Bird, he lives… in every bleat and roar; in every anguished moan and joyful squeal of delight. He does not simply make the trombone speak and sing, he breathes his life into it. Every musician wants to and makes it his business to have his instrument mimic the sound of his (or her) voice. But when Roswell is playing his horn and he does more than merely speaks through the shiny flared bell; life itself happens in the glorious ebb and flow of music.

This is just the way things are. It’s always been this way, from the beginning when Roswell looks back at the days when music began in New Orleans or Dixieland (as some called it). He joins in the celebration with Buell Neidlinger just so he knows from whence it came and where it is going; just so he could dance in the carnival and blow his heart out in the Mardi Gras. That was the only time he ever looked back. He looks forward ever since, discovering Bird and Dizzy and Herbie Nichols – whom no one wants to know, much less employ.

Given a chance Roswell will never stop speaking of Herbie Nichols; playing his music as he did with Steve Lacy and Buell, mining the gleaming gems for anyone who’ll listen, so much so that he finds some hidden treasure when he shares with one an all as he spreads the Gospel According to Herbie. It’s called The Unpublished Herbie Nichols and the black dots that Roswell drew on the staved paper literally leap off the page when Roswell plays them…

It’s like everything he does. There is a mighty dramaturgy in Roswell’s sinewy, restless music. I watch as the notes take shape and fill out with tone and color… shades of warm rusts and yellows… greens, reds and blacks… I watch as the notes pirouette in the air above me. The spectacular unfolding of timbre as each instrument interacts with the other—horns and reeds, strings, piano and percussion, and most of all Roswell himself, whose trombone becomes a human voice as it carves the air with monumental music.