Home Masthead Paul Winter: Basking in the light of the Sun

Artists such as Paul Winter have known – and lived – the kind of ecumenism that most churches preach but rarely follow. Long since held in awe by generations of musicians, Mr Winter is a sort of venerable éminence grise who – with a saxophone at his lips – channels the very breath of Mother Earth often bringing a hush and an effervescent cheer to audiences all at once. His concerts celebrating both winter and summer solstices are epic and are now, not surprisingly, the stuff of legend. Mr Winter, however, remains diffident to the point of being almost self-effacing, often ceding the limelight to younger musicians, generations of whom he has mentored, influenced and launched – via his celebrated Paul Winter Consort – like famous ships into the oceans of music. The most notable of these being the musicians of the legendary ensemble Oregon. Many others’ careers also took flight, launched from under his wing; among them the incredible Brasilian musician, Renato Braz and percussionist Glen Velez also come to mind.

In a quietly majestic career that has spanned more than sixty years, Mr Winter has remained relevant not because he has sculpted his music to suit the proverbial musical mode du jour. On the contrary, Mr Winter has remained true to the prompting of an art that seems to have come with an ethereal kind of divine blessing. His songs are caressed instead of played. Melodic lines flow like gentle winds, with phrases that whip and curl as he makes the black dots of staved paper rise up and float in great banks of wispy clouds swirling and dancing around harmonies, impelled by lively rhythmic sunbursts. All of this – combined with the whistling and singing of birds, the rustle of leaves in trees and other sounds of nature – always helped create a musical soundscape that is not only singular, but also seemingly eternal. As often as not, Mr Winter has lured voice artists to join in his praise of the earth and all the beings that live in it; artists such as Pete Seeger, Luciana Souza, Renato Braz, the legendary Irish singer Nóirín Ní Riain and – from Russia – the vocalists of The Dimitri Pokrovsky Ensemble.

When such a confederation of minds occurs, a mighty enchanted spell is cast upon audiences wherever Mr Winter chooses to play and it is then, like a medieval apothecary, his magical brew is poured upon the sensibilities of his audiences. The results are, quite simply, spellbinding. Two recent releases – 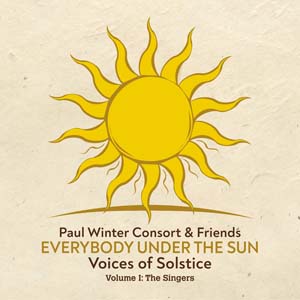 Paul Winter Consort & Friends: Everybody Under the Sun This is a priceless selection from decades of works recorded both in the studio and on the performance stage. There is music from Mr Winter’s near-mythical concerts that have been convened to celebrate various solstices over the decades. The subhead of this double-disc – Voices of Solstice Volume 1: The Singers – happily suggests that there might be a “Volume 2” [and more, who knows] at some point in time. Mr Winter may be in his eighties, but he shows no signs of slowing down. In fact, he has suggested that he is “ready for something new”.

The Singers double disc features some of the finest of Mr Winter’s collaborations with vocalists of every persuasion; singers who echo the wild beauty of the North American Rockies, the Amazon, the hills and dales of Ireland; the life-giving solar energy reflected from Africa, Armenia, Russia and the proverbial Shangri-La – Tibet. There are 30 tracks on two discs bookended – so to speak – by two versions of John Lennon’s popular idyll, “In My Life” interpreted once by the great Sharon Osborn and later by the celebrated Gary Brooker [of Procul Harum].

It is impossible to pick a favourite, but I am going to pick two from each disc anyway: From Disc One – “Seoladh” by Nóirín Ní Riain, the great Irish singer, writer, teacher, theologian, and authority on Gregorian plainsong, and of course, Jim Pepper’s mystical Peyote Song, “Witchi-Tai To” interpreted here by John-Carlos Perea. From Disc Two the two that are absolutely to die for are “Prayer [from “Suite Port-au-Prince”] featuring the Consort with Abdoulaye Diabate and “Before It’s Too Late” with the great Arto Tunçboyaciyan. And then there’s “Nhemumusassa” on Disc One with Chris Berry and “The Rain is Over and Gone” with Theresa Thomason… and…well, every other song as well is something to absolutely die for. 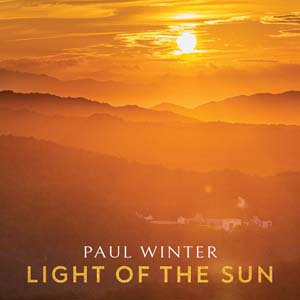 Paul Winter: Light of the Sun Almost a year to the date of the release of his double album, Everybody Under the Sun, dedicated to “The Singers” in his orbit over the past several decades, Paul Winter produced Light of the Sun an infinitely quieter, more private-sounding album of songs. The music is so elementally and proverbially “still” that it is hard to believe that almost all of it is performed with someone else in the studio – that is, every work is either performed in a duet setting or greater. The sound of Mr winter’s music has never sounded better, more focussed and so utterly pure of purpose and tone.

Mr Winter’s music – all fifteen works on this disc – bestrides the [simulated] dialogue between Fyodor Dostoevsky, who posits that “Beauty will save the world”, and the poet Yvgeny Yevtushenko who then asks “Yes, but who will save beauty?” [Both sentiments are printed in the inner cover of the disc]. Indeed, in answer to Yevtushenko’s question, the saxophonist gives breath to Dostoyevsky’s vision of the earthly beauty, set free – as it were – in tones and textures that soar out of the upper reaches of the soprano horn. The music is blushes with the warmth of solar tints that meld in harmony with the earth-tones of Mr Winter’s musical cohorts who number among them old collaborators Paul Halley, Eugene Friesen, Oscar Castro-Neves, etc. Also included here as well are two duets with the majestic Denny Zeitlin.

The music reaches its proverbial pinnacle with “The Well-Tempered Wood Thrush”. This is a song that combines one of Mr Winter’s favourite musical devices – combining the sound of nature [in this case a singing Wood Thrush] with his soprano saxophone. Also in on the action is an ensemble of seemingly like-minded [certainly inspired] musicians: cellist Eugene Friesen, Brasilians Henrique Eisenmann heard here on the perfectly-chosen fortepiano, and drummer and percussion colourist Rogerio Boccato as well as the inimitable Peter Slavov on contrabass. Interpreting Bach’s Well-Tempered Clavier with the song of a Wood Thrush is an inspired one. It is much more than a doffing of the hat to Bach, a work of considerable daring in which Paul Winter transforms – as if by magic – a composition replete with tonal math of Bach’s intellect into the free-flowing poetry of nature. It also raises an interesting question, something of a beautiful yet happy accident of ingenious musical re-engineering. For was not Bach, too inspired, to incorporate such the seemingly divine perfection of nature into the mathematics of his compositions?