Home Music Stephanie Nilles: I pledge allegiance to the flag – the white flag

It felt strange – for many reasons – to read the liner notes of Stephanie Nilles’ homage to Charles Mingus entitled I pledge allegiance to the flag – the white flag, a title, taken from an angry recitative written the legendary composer, contrabassist and larger-than-life American; strange because nowhere does she mention pianist Jaki Byard, one of the musicians who constituted the “terrible three” that included Mr Mingus, drummer Dannie Richmond and Mr Byard. However, Miss Nilles has something else going for her. She is, as Mr Byard was, a prodigiously gifted pianist completely immersed in Mingusiana just like that other Mingus alumnus – Eric Dolphy – who is referenced in her liner notes. 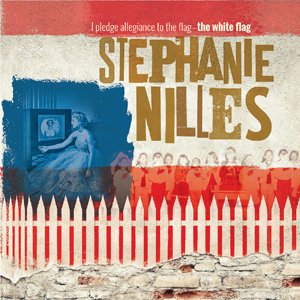 However, truth be told, Miss Nilles didn’t need to really make reference to Mr Byard at all; her music is eerily like his – in the masterful knowledge of Jazz history [from piano-rolls and stride to every other style that has coloured the great Black American Music], in her virtuoso pianism with which she expresses herself and these great works from the Mingus canon. But most of all, Miss Nilles captures the tortured agony and ephemeral beauty of this music like no one else, but Mr Mingus did in his lifetime.

This repertoire represents work that is difficult to wrap your head around if you aren’t black and coloured – as Mr Mingus was. It expresses what it was – and still is – like, to live in a racist, largely still Fascist society. It is challenging in the simplicity of its melodies, harmonically complex and if you take into account Mr Mingus’ penchant for abrupt changes in pulse and rhythm it could be impossible to replicate except by Mr Mingus himself; certainly it is impossible to express as brilliantly as Miss Nilles does on I pledge allegiance to the flag – the white flag. For in this performance Miss Nilles takes us to another world, deep within Mr Mingus’ soundworld.

This is a world full of glinting lights, mysterious depths, expectations, frustrations, hopes, and doubts – and above all, the anger and love that Mr Mingus infused into his music because that is what he was – a man and music of enormous complexity sculpted by anger and love into his towering frame. In sheer subtle colour and variety, in the depth of its characterisation and the exceptional range and refinement of pianism that could be achieved by a young pair of hands, Miss Nilles here imparts a power and tragic stature to an incomparable musical œuvre that picks up from where Duke Ellington left off and launches itself with a bigness that few [pianists] can achieve.

Every piece, interpreted in this solo setting, occasionally complemented by Miss Nilles’ raspy vocals, is played with urbanity and lyricism. She often weaves other iconic music of protest and social relevance by other musicians into her Mingus interpretations, but always does so seamlessly and tastefully. But significantly, and as ever, Mr Mingus’ compositions – musically astounding and each a stinging political rebuke of the country he loved – such as “Fables of Faubus” and “Pithecanthropus Erectus” are played with buoyant, aristocratic grace and psychological ambiguity, debonair virtuosity and effortless, almost insolent, ease. This is one of those albums that will always be remembered – and played over and over again – because it is, quite simply, a record to die for.