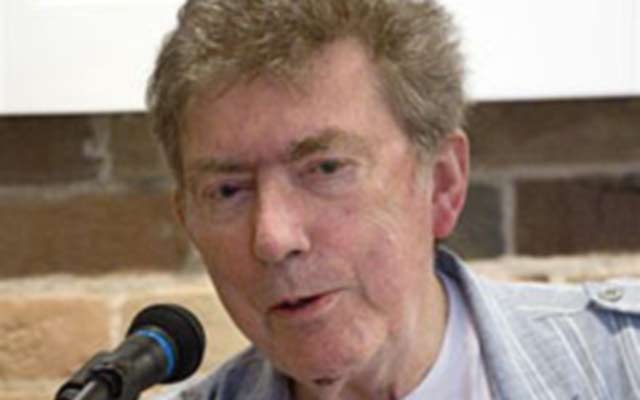 Miles Davis once famously suggested that the term “legend” ought never be applied to those people still alive—artist or otherwise. But there are times when a person—artist or otherwise— achieves so much in his lifetime that one is forced to apply that very epithet to describe the person in question. Yesterday, Toronto honored one of them: a legend, who long ago became part of the folklore of jazz in this fine city.

John Norris moved to Toronto in May of 1956 from England and proceeded to give to jazz in this country over 50 years of his life. In 1958 he founded Coda, one of the oldest and most respected jazz magazines in North America. Beginning as a mimeographed magazine, which he wrote and produced single-handedly until Bill Smith—another immigrant from England—joined him in 1963, Coda, as we know it today, is celebrated around the world.

Ten years later, Norris and Smith founded Sackville Records, a label that has been credited with bringing much great music to appreciative fans around the world as well. Sackville Records gave voice to many Canadian and American artists, from the traditional, mainstream and avant-garde. Musicians such as tenor saxophonists Fraser McPherson, guitarists Sonny Greenwich and Ed Bickert, pianist Wray Downes and clarinetist Phil Nimmons are just a few of those who have preserved some of their finest work on the label. From the US, Norris produced Sackville albums for trumpeter “Doc” Cheatham and pianists Jay McShann and Art Hodes. And because Norris was a fearless aficionado (and heeded his friend, Bill Smith) as well as a shrewd businessman, he boldly ventured to record saxophonists Julius Hemphill and Oliver Lake, reed- player Anthony Braxton, and trombonist George Lewis, all of whom proceeded to give their best to a label that believed in them without any preconceived notions or stipulations on their playing.

The jazz community in Canada has been letting John Norris know just how proud they are of him for a couple of months now, and on the evening of June 5, 2008, a generous gathering turned out to join the Art of Jazz at a very special concert to mark the organization’s Annual Celebration at the Distillery Historic District, Toronto, Ontario. Norris received a Lifetime Achievement Award on this night during a special concert featuring a stellar cast of artists who have recorded with Sackville, and who just plain admired the man, the legend… John Norris. The concert kicked off at the Distillery’s Fermenting Cellar with the sinewy Wray Downes Quartet, a group that drove the voltage up with a bluesy set that sparked life into the Cellar. Downes, known for his spectacular technique, driven by a mind that picks ideas from blues, jazz and classical soundscapes, set a furious pace with his two-handed domination of the ebony and ivory. Reg Schwager on guitar, Dave Young on bass and the sensational young Ethan Ardelli on drums jumped right in, following Downes on tantalizingly florid paths as he ran riot over the keys. The group’s rendition of John Lewis’ classic “Django” was breathtaking in its deconstruction of the solemn composition, densely colored with subtle tonal harmonic variations. But Downes’ wry sense of humor also showed, as he quoted from “Lullaby of Birdland” to break up the elegiac mood of the requiem for the great Gipsy guitarist. He doffed his proverbial hat to MJQ and Arnold Schonberg alike in a solo filled with dense chord clusters and thrilling runs as he traversed the song’s landscape.

Both Dave Young and Reg Schwager soloed on every song. Schwager in his inimitable style—surprising us with block chords every once in a while as he broke up single note runs—gave us a history lesson on the guitar. Young showed why he is considered one of the flag bearers on an instrument that was brought forth from its dark, subordinate role by the likes of Blanton, Pettiford, Brown and mostly Mingus as he mastered the strings with grace and articulation. Young plays with brilliant intonation. His harmonics are bright and very sophisticated, and you could tell that he and Downes enjoyed a very special relationship. The youngest member of the band, drummer Ethan Ardelli, has developed into a wonderful accompanist. He has a finely tuned sense of time and is a quiet listener—something of a rarity in our music world today. His sense of history is also very highly developed: there were times when he played like he had paid his dues from bebop onwards, even rattling the snare, then dropping a perfectly-timed rhythmic bomb on the tom-tom, a la Klook himself, the seminal Kenny Clarke! The Wray Downes Quartet was followed—for just one song—by the Generations Trio, featuring Andrew Scott on guitar, Gene DiNovi on piano and Dave Young (who stayed behind to anchor the trio) on bass. Ellington’s “Jump for Joy” featured some fine contrapuntal work by both DiNovi and Scott, the latter stretching out for a couple choruses, while revealing a very advanced sense of dynamics through his mainly single-note soloing. DiNovi played as only he can, with impressive technique yet always staying focused on the heart of the song, while reminding us that humor also belongs to music, with an almost sly nod to that Great Dane, Victor Borge.

The Generations Trio single-song set was followed by the all-too-little known Dan Block, a reeds and woodwinds player from New York who recorded his 2008 CD, Almost Modern: The Swing to Bop Project, on the Sackville label. It must be said that the album is no retro-tribute to swing and bebop; rather it is—as made clear by Block’s excellent liner notes—a wonderfully representative album of rarely-known swing and bop charts by the best-known practitioners of the music. Block (tenor sax and clarinet) was joined by fellow-New Yorker, Jon-Erik Kellsoe (trumpet), who enjoys an astounding musical relationship with Block and Torontonians Mark Eisenman (piano), Steve Wallace (bass) and Terry Clarke (drums). Block is a musician with a big dry tone and slightly breathy vibrato—and a wickedly humorous clarinet. The band played two tracks from the new album—Dexter Rides Again, the title referring to a Tadd Dameron-like composition credited to both Dexter Gordon and Bud Powell. This was followed by Hawk’s “Too Much of a Good Thing,” which saw Eisenman take flight in a wonderfully tight two-chorus solo followed by a single chorus from Wallace, whose bass sounded almost like the magnificent bull played by Buster Williams. The set closed with a tricky all-improvised tune that surprised even the pianist, bassist and drummer, the swing era classic that’s become a Dixieland favorite: “There’ll Be Some Changes Made.”

It was time for Norris to take the stage as Art of Jazz presented its first Honoree of 2008. One of the truly legendary figures of jazz anywhere in the world, John Norris basked in the glow of the evening, relating how he came to live his extraordinary life. He narrated snapshots of the past fifty years of his life—something that is embodied not only in every word he has written and published in Coda, but also in every extraordinary record he produced and put out on the legendary label that he still runs today.

Norris was also given the privilege of introducing the next guest at his tribute, the equally legendary, pianist-composer Randy Weston, who played a half hour solo set. Weston gave the audience a lesson in the history of the Human Diaspora, or creators of music, if you will. He announced nothing, but if you were in the audience that night, then you would have been taken on a voyage of discovery of African-American music, the precursor of all this contemporary music we call jazz. Weston’s set was a seamless one, one song leading into the other. Somehow it did not matter what the titles were, although one could discern several, notably Weston’s solemn and majestic composition “The Healers,” a blues, which was his way of saying thank you to the ancestors of all forebears who understood the true power of music, and “Chalabati Blues.” Weston is like no other pianist playing today. His voice is unique, and his technique derives from expressing the blues on an instrument that he has adapted to sound like he wants his voice to sound— percussive, humble and authoritative, born of a kinship with an ancient majesterium. Weston’s set was a rare interpretation of the blues, played with the wisdom of one who continues to connect at a higher level—with God, the greatest spirit—the Great Nzambi Pungu, as Randy Weston suggests in a liner somewhere.

The evening ended with Jim Galloway’s Wee Big Band, featuring some of the band’s most successful charts. Galloway has been one of Sackville’s most successful artists—from his Metro Stompers’ days—and swung the unforgettable evening all the way to its inevitable close of this memorable event. It was, as it turned out, one of the last times that I saw John Norris. He died on January 31, 2010 after suffering with a heart condition.