Home Masthead Concerning Louis Armstrong: The Complete Louis Armstrong Columbia and RCA Victor Studio...
In writing about a work [or works of] of art – that is: exercising the duty of a critic as opposed to the creator of the work [or works] or art – I believe that one must be held to an extremely high standard; if not as high as the artist himself, or as close as possible to the same standard that the artist demands off himself. In this regard I am always reminded of two things.

The first is one I learned from W.H. Auden, who delivering “Making, Knowing and Judging”, his Inaugural Lecture before the Oxford University on June the 11, 1956, confessed: “The New Iconoclastic Poets and Critics are discovered – when I was an undergraduate a critic could still describe Mr. T. S. Eliot, O.M., as ‘a drunken helot’ – the poetry which these new authorities recommend becomes the Canon, that on which they frown is thrown out of the window. There are gods whom it is blasphemy to criticize and devils whose names may not be mentioned without execrations.” Mr Auden was lecturing us about what it meant to know and to ‘know’, to ‘write’ and thereby to sit in ‘judgment’ of the artist’s work.

The second aspect of criticism worth remembering when writing about art – especially the art of Jazz – and most especially the music of the sainted Louis Armstrong is the writing of one of the most formidable intellects of any age, Amiri Baraka. The essay that comes to mind in particular is “Jazz and the White Critic”, a scorching missive that he had collected and published in his seminal book, Black Music, and which excoriated most [if not all] of the tribe of white music critics.

That was in 1963, when the so-called avant-garde was all the rage. This may have been “defensive-writing” to many, but reading it today begs the question: “How many critics are, indeed, really qualified…?” Also, does the world of white critics really understand where black art comes from? The answer to both questions is probably: Not too many; and not too many ever will until we truly understand that the black man is another human being, something that the old – and new – white colonial world has yet to truly reckon with.

Critics – like historians – can be polemicists, apologists, moralists, fabulists, cut-and-pasters, and – as many who lack erudition – unvarnished hacks. History can also be quite immemorial. “And the endeavour to ascertain [these] facts [was ] a laborious task, because those who [were] eyewitnesses of several events did not give the same reports about the same things, but reports [varying] according to their championship of one side or the other, or according to [their] recollection,” once grumbled Thucydides.

What’s this got to do with Louis Armstrong? Everything, it would seem, if you start perusing this magnificent box set by reading the liner notes. Reading the booklet it seems that there is very little positive about Mr Armstrong’s work from 1946 to 1966. There are so many negative anecdotes that the notes are hard to read. [I gave up after a while and went to the music instead, which is what I should have done in the first place]. In page after page we are told just how much Mr Armstrong’s music had deteriorated, or at least how much less impactful he was during this period compared to the two decades earlier, presumably from when he was with King Oliver through his sojourns with his own Hot Fives and Hot Sevens. 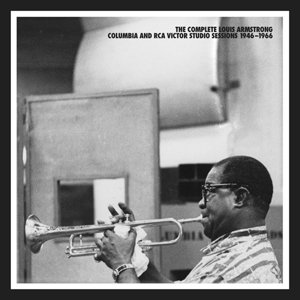 There are damning quotes from no less a personage as Leonard Feather who – more surprisingly it would seem – goes on to produce of several of these dates. There is also criticism from George Avakian who also produced some of these dates included in this set. It begins to appear as if every page has something negative to say about Mr Armstrong’s playing during the period. Remarkably, the only one who comes to Mr Armstrong’s defense is Mr Armstrong himself. He is quoted as telling an interviewer in London in 1959: “Whatever it is, can’t nobody do what I do”. Even earlier on, in 1956, he said: “[They] don’t realize that I’m playing better now than I’ve ever played in my life.” The French writer Hughes Panassie is also said to have heard someone attempt to praise Mr Armstrong by saying to him: “Pops, you made a wonderful comeback.” To which Mr Armstrong retorted: “A comeback? Where was I?”

And on and on it goes… The notes seem to muddle along mixing anecdote with documented history, which is more important in the first place, and which the masterfully – as always – discographical compendium that is appended to the booklet of every Mosaic production. Make no mistake; this is a masterful Mosaic box set. However the extremely blurred line between “historical fact” and “editorialising” is, to say the least, quite remarkable; and keeping the two separate us paramount or as one of my other esteemed college professors once taught me that: “never the twain shall meet”. All, however, is not lost, thanks to Michael Cuscuna and those wonderful folks at Mosaic, and principally Ricky Riccardi, Director of Research Collections at Louis Armstrong House [these booklet notes notwithstanding].

At any rate, when it comes to judging Louis Armstrong by his oeuvre [in the short term or the long term and in any decade], it might pay to consider seriously – and with veritas – what Miles Davis once said: “The history of jazz can be summed up in four words: Louis Armstrong Charlie Parker”. So there… make of it what you will, but never forget it was Mr Davis who said that, which I have come to believe. Almost all of this music is proof that Mr Armstrong’s fire may have burned low, but burn it did – and does through this music – and that too, with a rather blue flame. It is true that the Pops of ninety years ago, when he delighted his legion of fans by appearing in concert with a small group – the kind of New Orleans combo with which he revolutionised American music in the 1920s.

His work that followed, with the big bands he’d been leading through the 1930s and 1940s was largely panned by critics – almost all of whom were white. Indeed he was also roundly criticised, including by the likes of Dizzy Gillespie – never by Duke Ellington or Billie Holiday, mind you – but how much of that was a reaction to his [Mr Armstrong’s] labeling early forays into so-called Bebop as “Chinese music” and how much was really a reaction to his playing is a moot point. Moreover, critics were driven to delightful madness by the music that Bird and Diz and Monk made and you can count Mr Feather and producers like Mr Avakian among them too.

The fast-paced rhythm of the world of Jazz was changing and Mr Armstrong being the pioneer that he was perhaps took his time reacting to the changes. But when he did, it was what everyone had been waiting for; a return to the style of his greatest achievements, a free-wheeling format made for mutual inspiration and joy. He sang as he played – with masterful phrasing that embodied narratives in the most meaningful and lyrical way. No one could phrase like Mr Armstrong; indeed you could draw a straight line from him to practically every vocalist who came after him, from the blues shouters to pop singers from Frank Sinatra to Barbra Streisand [and beyond]. This is eminently clear on these recordings.

This is especially true of his performances in the groups that include trumpeter Charlie Shavers, clarinetist Jimmy Hamilton, alto saxophonist Johnny Hodges, tenor saxophonist Don Byas, Duke Ellington and Billy Strayhorn, guitarist Remo Palmieri, bassist Chubby Jackson and drummer Sonny Greer. The same holds true of the sessions featuring Louis Armstrong and His Orchestra – which included vocalist Velma Middleton, bassist Arvell Shaw [with whom he was to shine for years to come], and with trombonist “Big Chief” Russell Moore; and with the small combos featuring Jack Teagarden Barney Bigard, Dick Cary, Mr Shaw and Sid Catlett. Mr Armstrong’s manager Joe Glaser had a big role to play when he sacked the big bands and launched Mr Armstrong and his All Stars, an ensemble with which Mr Armstrong became synonymous, touring the world almost until his death in 1971.

It was this band that introduced a new generation of listeners to Mr Armstrong’s genius and it is this music that we largely hear on this fulsome box set. Though some of the music here sometimes sounds formulaic, its lineups are starry indeed, all playing with the kind of creative fire you’d expect from a gathering of immortals led by Mr Armstrong – Mr Teagarden, Earl Hines, Mr Bigard, Mr Catlett, Mr Shaw, Dave Brubeck, Gene wright, Danny Barcelona and Joe Morello, and others.

These are natural peers of Mr Armstrong’s rarefied realm, following his clarion lead in such classics as “Aunt Hagar’s Blues”, “St Louis Blues”, “Muskrat Rumble”, “Yellow Dog Blues”, “Black and Blue”, “Honeysuckle Rose” “Squeeze Me”, “Barcelona”, “King for a Day”, “Mack the Knife”, and “Canal Street Blues”. It takes complete surrender – it always does – to be seduced by each alternate take, just as it takes patience to catch your breath through the false starts and mishaps alone the way. The reward – as always with Louis Armstrong – is frequently catching a glimpse of the Holy Grail of music, which is none other than the ghost of Louis Armstrong.

Meanwhile, throughout these recordings and in the flesh, these musicians – his soul-brothers, as it were – with whom Mr Armstrong plays and sings with a shared warmth, wit and uncommon genius. And Mr Armstrong, of course, reigns supreme. Whether he is delivering jazz standards or pop tunes, his musicality and power are remarkable, making everything he touches his own, illuminating the simplest phrase. His showmanship – yes, that too – was as natural as his musicianship; in both he reached out to his audiences. And even if younger musicians were often sceptical of Mr Armstrong “the entertainer”, they all remained awed by Mr Armstrong “the master of jazz and life-force” someone who you could say was less man than miracle.