Home Books This is Hip – The Life of Mark Murphy by Peter Jones:... 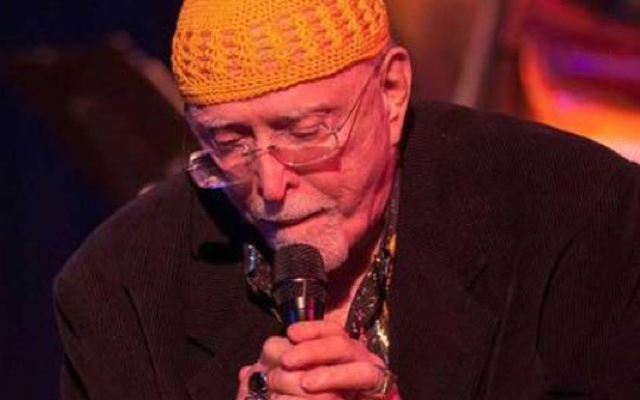 This is all we need to know to appreciate what Mr Murphy does to sing. But what do we, as readers – old or new to Mr Murphy’s work – really know about his art; his “interpretation” of song? The answer lies not in whether his performances passed or failed for “jazz” or “pop” or even “Frank Sinatra” and Eddie Jefferson” – and most importantly – for “Jack Kerouac”, but how, as Ezra Pound would posited – he makes “everything new”. How he twists words, bends the syllables contained within; how he sculpts the lyric and the narrative. And this interpretation “summoned”, as it were, “to reconcile the ancient texts to ‘modern’ demands” is the only tool we need to appreciate the “newness” of Mr Murphy’s shaping of his art. For instance how he featured beautifully crafted arrangements of beguiling variety and sensuousness in every lovingly crafted phrase of “Spring Can Really Hang You up The Most” (Rah, Plaza Sound, 1961). Or how in listening to “Dearly Beloved” and “Serenade in Blue” (Lucky to be Me, HighNote, 2001)we hear how seductively he bends the notes and how he sculpts the long sustained inventions; or how it’s clear that there’s not a single semiquaver that hasn’t been fastidiously considered? But what does Mr Jones’ book give us? Sadly, in much to many pages we find a regurgitation of critiques written about his work in magazines such as DownBeat magazine and elsewhere. This only goes to show what uninformed judgement and poor prose often passed off (and still passes off in DownBeat and elsewhere) as music criticism. Mr Jones, himself a musician and vocalist, might have attempted at least to re-examine Mr Murphy’s work. A priceless opportunity lost, so to speak.

But there is something else that we have to contend with in This is Hip and that is the book’s very thesis: that Mr Murphy is first and foremost a hipster, a seminal figure in the grand scheme of Jack Kerouac’s world and On the Road. This is perhaps where the books falls farthest short of its intended “target”. The “hip” nature of our hero is abandoned every once and a while for reportage from various music magazines such as the above. Instead: would Mark Times, the fan magazine published in England have been a goldmine of such material? We would never know because all we get are reviews and more reviews of Mr Murphy’s work. “Interpretations”, if you will, of Mr Murphy’s “interpretations” instead of perhaps holding up a mirror to his voice and style and the leaps and glides that made

as the lyric came alive; as his emotions cut to the heart of music and the experience. And where is the hipster in all of this? True we catch a glimpse of Mr Murphy unsure of where he wants to be; the East Coast or the West Coast, the US or Europe. But if he was a character in a Kerouac book come to life, what made him hip? Was it language? Was it how he dressed? Spoke? Spoke and sang? Did he invent a new language perhaps? Or was it merely that he had a “hip” attitude? If it was the latter – which history clearly tells us it was not – why don’t we get “it”?

In fact it was a combination of all of the above. But we get nothing of this in Mr Jones’ book. We get what Mr Kerouac meant to Mr Murphy. Being hip in the “Kerouacian” sense was clearly an agglomeration of all of the above and Mr Murphy had all of it going, but while we seem to get glimpses of this from time to time it is only in the last three or four chapters that this emerges. Here we see Mr Murphy at his most vulnerable after the death of his partner. Now he appears “tragically hip”, but more than anything else he becomes rootless and this is exacerbated by the onset of what seems like Alzheimer’s. The combination all of this combined with the fact that he never really had an anchor in life seems to take away his own. It is here that Mr Murphy’s life – and Mr Jones’ biography becomes most compelling. It is here that we feel deeply connected with Mr Murphy, almost willing him on, to continue, to sing, to be the musician and vocalist who held us enthralled for so many years without expecting much in return. Appreciation – certainly not “interpretation” – of what he was trying to make of his art.

These are matters of approach and style, at least when it comes to this book. While it unveils the subject – the principal and secondary characters – aas a work of art its power is considerably dimmed. And this is a concern not only with This is Hip, but so many biographies of contemporary musicians – especially jazz musicians. Why, one begins to ask does a jazz musician such as Mr Murphy, not merit a biography such as Steve Jobs by Walter Isaacson (Simon & Schuster, 2011)? Or The Life of Langston Hughes by Arnold Rampersad (Oxford University Press, 2002)? Or something closer to home, for instance, as vivid and breathtaking as Jack Kerouac | Allen Ginsberg | The Letters edited by Bill Morgan and David Stanford (Viking, 2010)? Why not give the measure of the man in the winningest, most literary way possible? Also, as flawed as these elements, there is also the style in which it is written, which sometimes suggests that an American AP Style Guide has been employed. And while the quarrel is not with such a guide, it is with sloppiness as this: all too often Mr Murphy is referred to as “Murphy”, but more often as “Mark”. And the frequency with which first and last names are muddled together suggests inconsistency and perhaps flawed editing, and idea that the numerous spelling errors in the book seem to support. Is This is Hip a good biography to have? In many ways it is, and this is not only because it is “the only” biography available. Those last three or four chapters and the breathtaking many in which that part of Mr Murphy’s life unfolds is reason enough to have a copy of the book although not many readers – certainly members of the musical cognoscenti – will agree that it gets to the heart of what made Mr Murphy so special to be around and to listen to.