Bill Banfield: Pat Patrick – American Musician and Cultural Visionary
Whatever you take the title of the book Pat Patrick – American Musician and Cultural Visionary by Bill Banfield to suggest, there is one feeling that will almost surely arise before you even turn open the cover and that is the feeling of great expectation. After all Pat Patrick is known – or ought to be known – as one of the most important American Jazz musicians; an icon of the avant-garde. His baritone saxophone adorned one of the greatest Jazz bands – Sun Ra’s Arkestra. It also danced and soared and sang with elemental gravitas in ensembles led by Duke Ellington, Thelonious Monk, Mongo Santamaria, Nat King Cole, James Moody, Eric Dolphy, Marvin Gaye, Patti Labelle, Billy Taylor and others. All this was in addition to seminal groups that the baritone saxophonist led himself. The names alone, however, are meaningless. The music that he played and every time he did that (play The Music, i.e., Jazz) it was breathtaking. But there was much more to Pat Patrick. He was a thinker with a deep, activist Black consciousness and that, more than anything else, is reflected (not only in his music, but) in his poignant entries about racial discrimination and Black pride that appear to have been made in various notebooks – in addition to the tone colour that he brought to his music – both in composition and in performance – his dramatic works and vivid literary endevours.

Telling the story of Pat Patrick has never been done before. We do know him from his music and the liner notes to Sun Ra’s music – especially work curated by Dr. Michael D. Anderson. We learned a little more from A Reason to Believe, the extraordinary autobiography of Deval Patrick, the former Governor of Massachusetts and Pat Patrick’s only son, which was published in 2011. However, for a giant of Jazz, his story is largely unknown, and waiting to be told. It is one of the great opportunities, especially if you have at hand tapes and notebooks, photographs and copiously annotated newspaper articles and posters of concerts and other punctiliously documented memorabilia. This is what the Patrick family – Deval, Rhonda Sigh and La’Shon Anthony – were sitting on after Pat Patrick died in December, 1991. Discovered in a storage locker that Pat Patrick had left behind near his mother’s home in East Moline, Illinois these ‘boxes of papers’ 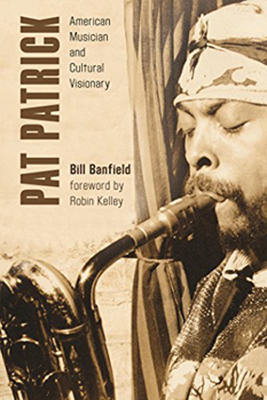 contained Pat Patrick’s ‘stuff’ including his last will and testament with which everything he had, including the instruments he played were left to his children. Wisely, all of this was donated to the Berklee College of Music, Boston, Massachusetts, and to Bill Banfield who curated them.

What a goldmine to have even before you set off on a voyage of discovery into the life of Pat Patrick. Why then should the story of (as the author Bill Banfield calls it) Pat Patrick – American Musician and Cultural Visionary end up in disappointment? To begin with, when there is a compelling story to tell about a giant of Black music in America, it is the duty of the storyteller to tell the compelling story. You take the facts and swathe them in a narrative that brings the story to life with all the viscerally exciting energy that surrounds the music, its composition, its performance – no matter where it is played, from dive and jook-joint, or within the hallowed portals of the centre of culture and learning, all of which are venues where Pat Patrick made and played music. It was here were the music swung and vibrated, and caused many a hip to twist and wobble, many a soul-searching odyssey into both the great unknown and into the consciousness; that Black American consciousness that was in revolt against a white society that kept it repressed while it stole everything from the very heart of it, especially its music, to profit selfishly from it. This is the history that Pat Patrick grew up into. But his music that arose out of it tells only part of the story and Bill Banfield knows this only too well.

We are waiting, for instance of the first episode and probably the most important one in Pat Patrick’s celebrated career as a Black musician: his pioneering tenure with Sun Ra. Of this we hear nothing; not even a review of one of the most important recordings in Jazz History: The Heliocentric Worlds of Sun Ra that began on April 30, and ended sometime on November 16, 1965, or, even before that, when Mr. Patrick joined Sun Ra in featuring the great Pharoah Sanders and Black Harold at the Jazz Composers Guild’s iconic Four Days in December captured by Bernard Stollman for his seminal label ESP Disk, in a recording made at Judson Hall, New York, on December 30, 1964.Nor do we have reviews of the monumental recordings Jazz by Sun Ra recorded on July 12, 1956, or Supersonic Jazz, recorded on April 13, 1956, Jazz in Silhouette recorded on March, 6 1959, or The Futuristic Sounds of Sun Ra from October 10, 1961. Much, if not all of this latter music, from the early and mid-1950’s was also pre-Arkestra, the importance of which in the context of both Sun Ra and the Arkestra, and Pat Patrick, has rarely been discussed but must surely be there, for we have hints of it in the writings of Pat Patrick.