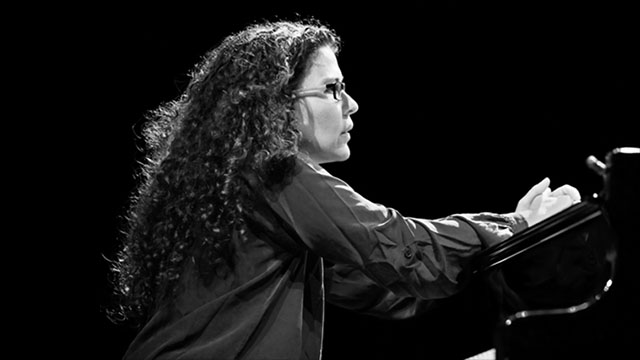 Of all modern chamber music artists, pianist Sylvie Courvoisier’s playing comes closest to imitating the pirouettes, the leaps, the twists and turns of dancers’ bodies. When she plays, her hands cross over as if the bodies of dancers were intertwined. This makes the experience of the audio recording of Abaton (2003), her debut for ECM, extra special. She must surely have envisioned dancers making their way to that mythical, forbidden land of “Abaton.” If the music on the CD is extremely evocative, it is made complete, with the bold foray into the heart of Courvoisier’s music by Anias Prosaic’s film Abaton. 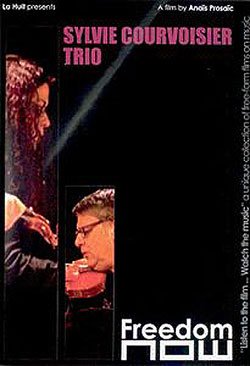 The film is as breathtaking as Courvoisier’s music. It features performances by Courvoisier (pianoforte), Mark Feldman (violin), who also happens to be her husband, and Anja Lechner (cello), the latter replacing Erik Friedlander, who played cello on the CD. The virtuoso dancers are Marielle Girard and Cyril Davy. Why make a film of chamber music written for just a trio? The answer is found in the music itself. It is conceptual—a highly successful attempt to create a sonic landscape of a journey to a dark, mythical place. Then, there is the painterly aspect of the music, one that virtually demands another kind of human interpretation. A performance painter may have turned in a wonderfully tortured canvas of the music, but so much the better for a 42-minute film!

The program opens with “Orodruin,” an obliquely conceived transportation to J.R.R. Tolkien’s fictional universe. Also known as Mount Doom, “Orodruin” is located at the heart of the Black Land of Tolkien’s epic tale. The place of the piece is a volcanic mountain 1.4 km high and is the end point of a journey to destroy the Ring. In Sinahrin, this is the Mountain of Fate. Sylvie Courvoisier has turned this into a vigorous piece of music, on which her piano is percussive as are the violin and cello while describing the journey to its inevitable denouement, an odyssey fraught with danger. Courvoisier moves every part of her piano, including plucking the strings in a particularly violent passage.

The next two pieces are decidedly brighter. “Too Speedy” and “Tony Delito” appear not to be from the same storyline; if they are, then they point to lighter moments in the epic journey to this forbidden land. In the latter of the pieces, the viewer is introduced to the graphics of Mathieu Foldes. These appear to add even a touch of the comic to the musical expedition. But little can prepare the viewer for the final part of the journey—the quest for “Abaton” itself. Legend has it that this is a town of changing location. No one has ever reached it, and those who try have been known to wander for years in search of it.

With this background in mind (the curious viewer is expected to know, or find out all about, the “Abaton” of mythology before watching the DVD, which comes with informative notes), Sylvie Courvoisier has composed a remarkable likeness of what must be a journey in futility! The musical phrases and ballet movement that intertwine in an attempt to describe the journey appear to take place in a tortured, almost suspended animation. One is tempted to scream, “Stop!” as a warning to the dancers who perform the difficult piece, not possessing the spectator’s almost sixth sense for the tortured soul!

In the end, Abaton is a remarkable addition to the musical opus that was produced by ECM three years before the film was released. This version is newly packaged by LaHuit and re-released under a new series title, “Freedom NOW.” It is well worth the buy for both aficionados of Courvoisier’s work as well as for those who would watch a film just because it represents the cutting edge of both the musical as well as the cinematic media.