The last two recordings by Troy Roberts have been among the most exciting recordings by him to listen to. Just before he released this one, Stuff I Heard Mr Roberts made Days Like These (Toy Robot, 2019). That (former) recording explored a soundworld between his tenor saxophone and the undulant, sibilant and often gloriously thunderous rippling of the Hammond B3 organ played by Joey “Jedi-Master” DeFrancesco and emerging keyboard wunderkind, Emmet Cohen, who shared organ duties with Mr DeFrancesco on five tracks of that album entwined with the melo-rhythmic genius of Jeff “Tain” Watts on drums. This (2020) release presents an experience of an altogether different albeit wondrous kind. 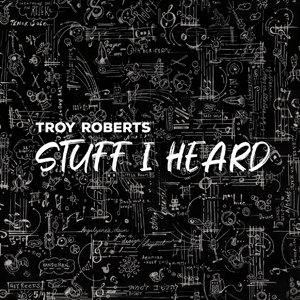 On Stuff I Heard Mr Roberts makes an appearance playing soprano, alto and tenor saxophones as well as contrabass and electric bass, with Jimmy McBride (about whom more will be said later) on drums. If you thought right off the cuff that this is a case of Mr Roberts showcasing his dazzling woodwind and/or – skills on more than one instrument, you would be almost entirely wrong. A “showcasing” it surely is, but that doesn’t even begin to describe the viscerally exciting experience of this recording. And it may miss the whole point of it entirely… Of course musicians – especially saxophonists – will know immediately how diabolical it is to play (let alone switch) from one type of saxophone every now and then; and of course, there is the near-impossible task of re-thinking each melody in an inharmonic sense and that too, differently over and over again…more difficult than a Lennie Tristano exercise.

No, Mr Roberts is out to let us in on the experience of exploring the colours and tone-textures of each instrument. All of this embellished by the altering experience of time, which is, of course, a whole different story. To do this he embellished his own impeccable sense of that latter aspect of music by enlisting the services of Mr McBride. The drummer adds his prodigious gift for percussion colouring to the repertoire of this record. Each drum is explored across the entire surface of its skin with stick and brush. Cymbals are smashed, caressed, sliced and slashed, poked and prodded. The result: a wondrous array of brassy sounds that range from whispering to sizzling and screaming.

None of this enjoyment would be possible without the music itself – which seems to have been crafted by a superior musical intellect with a grasp of history and context as well as a sense of time and place, and – above all a sense of poetry, the ability of a storyteller and a wonderful sense of timing. Mr Roberts has all of the above in spades. And he is a brilliant musician – and, as we now know – master- exponent of at least one instrument: the saxophone. Moreover, let’s also give him credit for being a very good bassist. Finally I would be remiss if I didn’t acknowledge that without the “big” musical ears of Dave Darlington, this may not have been half the recording it has turned out to be.