Home Music The Westerlies
As Cesar Chavez once said, “Our language is a reflection of ourselves. A language is an exact reflection of the character and growth of its speakers.” The second part of Chavez’s own reflection makes mention of “character” and “growth” which is an “exact reflection” of the extraordinariness of The Westerlies apropos of their eponymously titled album, The Westerlies. It is the “character” of this chamber group that is poised to grow – as the trade winds blowing from west to east – not only in their power and significance, bold as brass originating in the proverbial “horse latitudes” steering heartfelt, earthy, extramusical cyclones in and out of the rarified realms of the intellect and back into the heart, via the mind’s ear.

If that sounds profoundly hyperbolic it’s because there’s truth of a forceful kind in the musical language of trumpeters Ryan Mulherkar and Zubin Hensler, and trombonists Andy Clausen and Willem de Koch. Its fiendishly powerful notes and accents are back-translated from quietly virtuoso performances to elevated compositions, contributed by all the members of this quartet, which are actually often angelic despite the fireworks of The Westerlies that inform solo capriccios one of which (in the final third of “Lopez”, on disc 1) crawling all over the air and ascending to a howling pitch 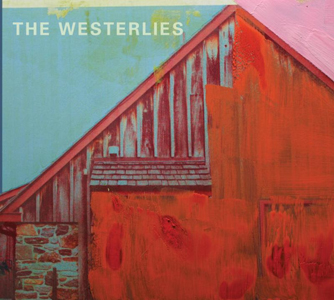 that buffets the winds, even as the unfailing elegance of their challenging glissandos and arpeggios powers the music of “So So Shy”, “New Berlin, New York” and “The Beekeeper”.

The playing of The Westerlies – in Mulherkar’s and Hensler’s eloquent trumpets and Clausen’s and De Koch’s trombones – certainly belies the toughness of the music by being extremely well-tuned and sweetly turned at every step, with a richly ear-pleasing sound and little sign of technical struggle. As that diabolical force really does lurk in music such as “The Beach” and “All To Ourselves (Disc II), there doesn’t seem much chance of knocking the quartet off their stride. Their musicianship is likewise faultless, unconcerned with tricks and quirks but rather with letting their trumpets and trombones do the speaking, This is top-class manipulation of brass instruments reminiscent of virtuosos who brought these instruments and their repertoire into the modern era.

Like all significant recordings there is always a non-playing instrumentalist at work. In this case it is Jesse Lewis who produced, recorded, mixed and mastered The Westerlies. Talk about Houdini “with Big Ears” and you wouldn’t be far from the truth. Lewis brings his own brand of unfussy virtuosity to this album. His is a Coriolis force, that inertial (notoriously so-called “fictitious force”) which acts on objects that are in motion relative to a rotating reference frame – in this case The Westerlies relative to his console. It is this that enables the production of the excellent sound, which adds both body and bloom to this gem of a double-disc.